Unique places in Russia, about which you are unlikely to hear: Egikal

In the center of the Caucasus mountain range, where the top, like daggers, sparkling glaciers and slopes are covered with emerald green meadows in the valley of the turbulent river Assa long time ago there lived a man named Ga. He was wise and lived a decent life. He had three sons: Ega, Hamhi and tergite. Dying, Ga called his sons, and commanded them:

You Ega, settled in the village where I lived. You Hamhi, build your village. However, do you, tergite.

Local residents called themselves Gilgal, which translates as "builders of the towers." In the villages it was not clear the inhabitants of the plains huts and dugouts too impractical. Highlanders built high stone towers.

Since the beginning of the Mongol invasion route of the Silk Road for safety reasons "migrated" from the plains to the mountains. Egikal, Hamhi and Targim were just on its route. Locals are actively traded with caravans, and charged with a tribute to the merchants. Villages grew and grew rich.

Gradually, the families living in these areas have become so influential, that extended self "Gilgal" to neighboring tribes. In this regard, it is believed that with Egikal began the resettlement of the Ingush people on Assinsky gorge.

Later Gilgal built at the exit of the gorge large settlement Ongusht (Angusht, Ingusht). Russian Cossacks nicknamed the people who lived there, Ingush, and the place - Ingushetia.

But as the mountain Ingushetia was centuries ago "the land of the towers," and it remains to this day.

What to see in Egikale?

Historical and archaeological research found that life in Assinsky Gorge boiled already in the XII century. But the flourishing Egikal when village became really significant political, economic and cultural center of the mountain Ingushetia, came in the late Middle Ages.

While the tower complex on the southern slope of the mountain Tsey-Loam consisted of six fighting, five poluboevyh and 50 residential tower structures with different extensions. The perimeter aul zoster double ring defensive walls. 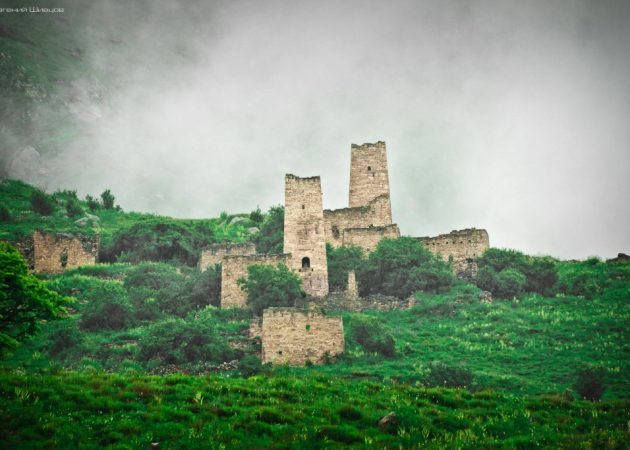 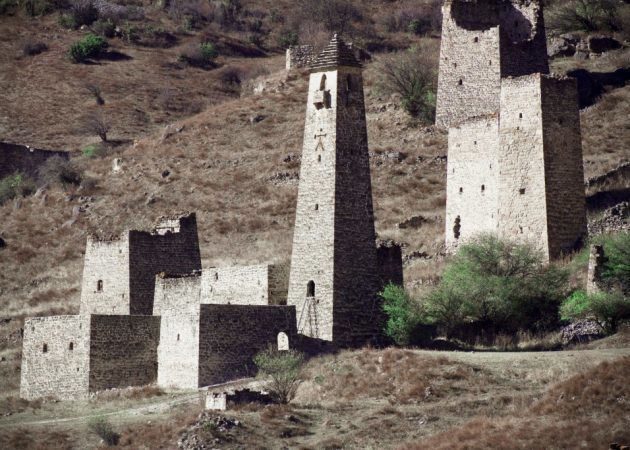 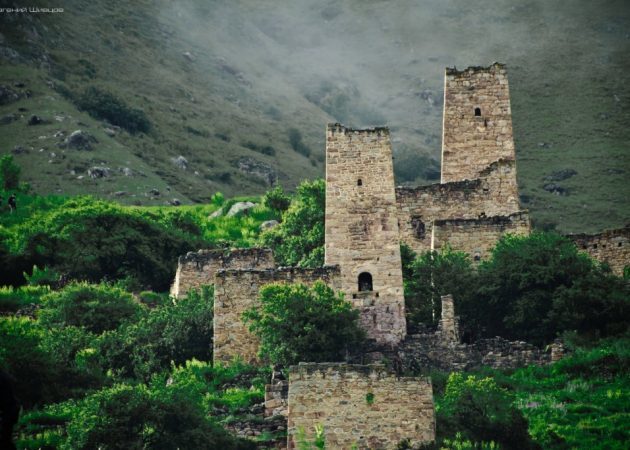 Before you build a tower, carefully prepared place. To do this, we poured milk in a selected area, if it has not seeped into the ground started construction; if leaked - dug up the rock base. Why is it so difficult? The fact that Gilgal not poured the foundation, and it is necessary for the construction of a reliable basis.

When choosing a location for the future of the tower also reflects the specificity of the soil and distance from rivers and streams. Highlanders understood that water - it is life, the closer it is, the safer and that fertile piece of land in the mountains of gold. Such land cherished and never taken for construction.

The most affordable building material in the mountains - stone. Therefore, all the buildings in the surrounding villages and Egikale erected on the so-called cyclopean technology.

Cyclopean masonry - is the construction of the walls of large blocks of stone without the use of a binder solution.

Architecture and purpose of the tower divided into three types: fighting, poluboevye and residential.

Initially villages consisted only of residential towers. They were called galami.

Gala - two- or three-storied rectangular tower with a flat roof and pillar stone in the center, which is attached storey floors.

Each gala belonged to a certain race (so now the tower called by the names of the families who lived in them). On the ground floor, as a rule, kept livestock (sheep, goats), and on the top a few related families lived. Next to the residential tower necessarily built semi-underground or above-ground crypt. Thus, a gala - a kind of a family mansion, where generations of the same kind followed each other.

Genesis in the tower was built is very simple. Things were stored in niches of thick stone walls, drowned in a black, cooked on an open hearth. In this case, focus and a chain on which hung from the boiler, were considered sacred - all important decisions are taken by the hearth, and the chain was a family heirloom. 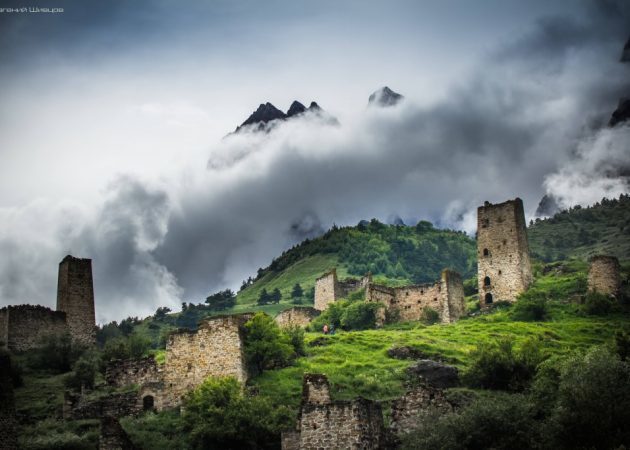 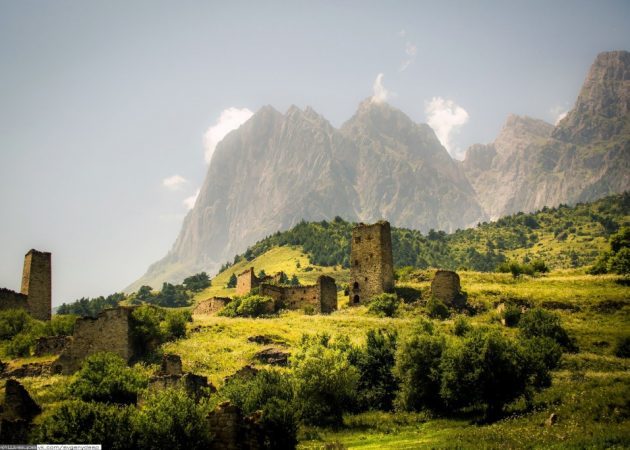 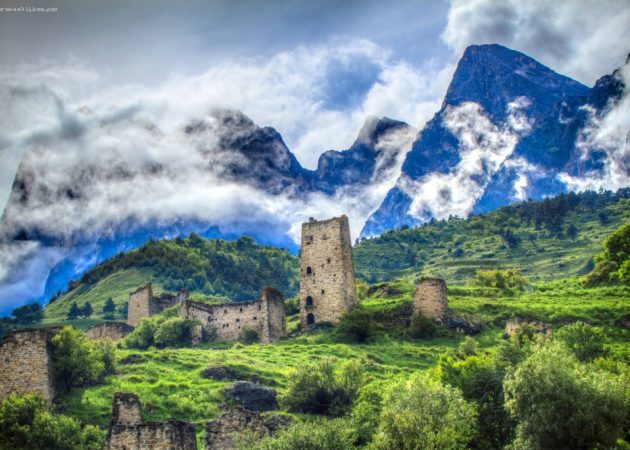 Residential tower to be sure to build in one year, otherwise the race was considered weak, lose respect. The builders had unquestioned authority. Even if they tinker and built on a century tower begins to crumble, it was thought that the owners are to blame. Greedy little hard workers paid - hence the marriage.

Gradually, relations in the ancient Ingush society has changed: there were feuds. This, in turn, led to the emergence and spread of new types of towers - poluboevyh. They also called galami and resembled ordinary residential towers, but were better suited for combat and defense. So, they were niche for archery and the "balcony" to drop on the enemy stones or pouring boiling water.

But the pinnacle of architectural art Gilgal rightly considered turrets.

Vouv - high (not less than 20 meters) square military tower, which had, as a rule, five floors and a pyramidal roof.

In vouv was only one entrance / exit leading directly to the second or third floor (the first held captive). To climb the ladder, performs the same role as the bridge over the moat in medieval castles: it is always possible to be lifted up.

The width of the top floor of the tower combat, usually two times lower than the first. Vouvy narrowed up by chance: during the siege when the enemy to conquer one of the floors, climbed above the defenders and barricade there. What were the walls, the more difficult the enemies attack.

Due to this, a sufficient supply of water and food, the towers could withstand a long siege. 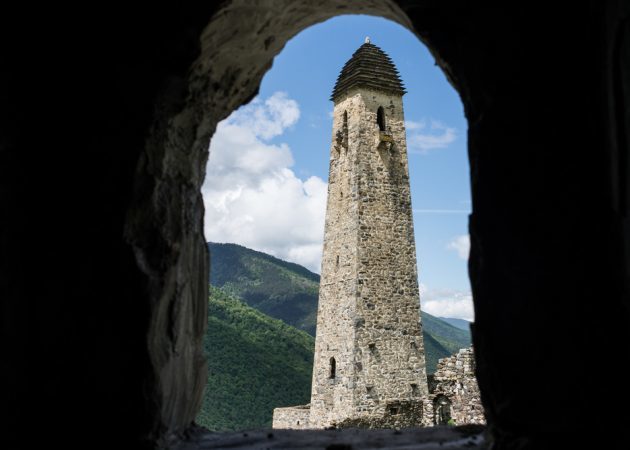 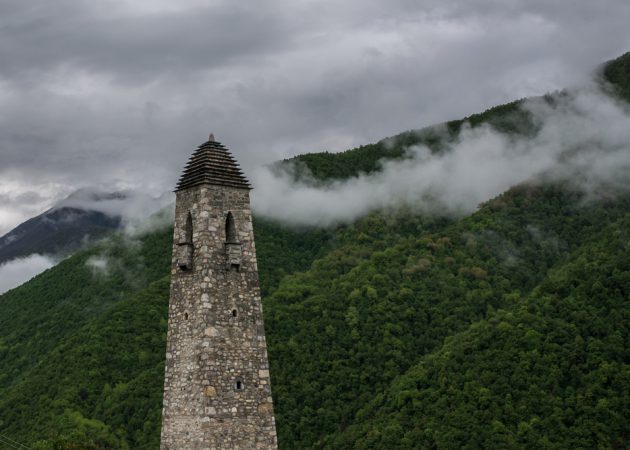 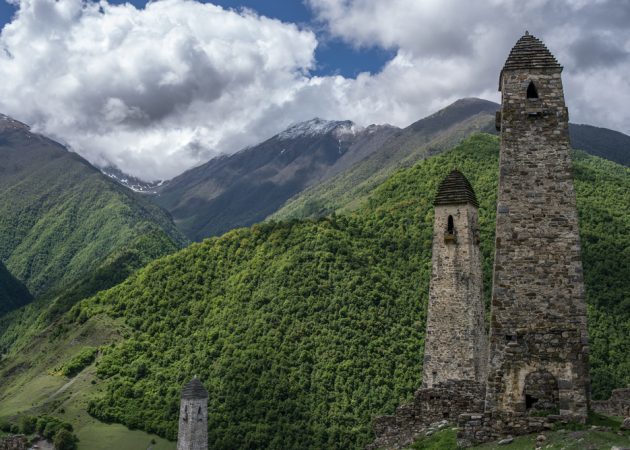 In addition, vouvy played an important strategic role. They were placed on the perimeter of the village, at junctions, entrances to the gorge and t. D. The tower was built at the highest point of the valley. First, it complicates the task of enemies, and secondly, because it was easier to transmit signals of impending danger from aul to aul.

During the XVII-XVIII centuries vouvy it was virtually impregnable. Even if the enemy managed to capture a tower, its defenders on the hanging bridges to move to another and take up defensive positions there. But in the XVIII century, with the proliferation of firearms, vouvy lost their invulnerability - their construction stopped.

Egikal - it is a large tower complex has been preserved to our days. There you will see both residential and poluboevye Gala and fighting vouvy. One of the battle towers 27 meters dostoyal to the present day in almost perfect condition. She is like an ancient warrior, still guarding the homeland. In total, the village remained the order of a hundred different buildings, creating a unique atmosphere. Medieval tower if you return to a hundred years ago, people lived here under the laws of the mountains, for the wrongs paid with blood, and a guest in the house gave all the best.

Things to do in Egikale?

Egikal today - a unique open-air museum. He is a member Dzheirakhsky-Assinsky State Historical-Architectural and Nature Reserve. Therefore, the main purpose of the trip in Egikal - visiting the ancient towers.

To do this, the best time is the summer. Gala and vouvy as formally incorporated into the landscape that you can spend hours wandering through the aul, admire the towers, mountain scenery and take pictures of them. 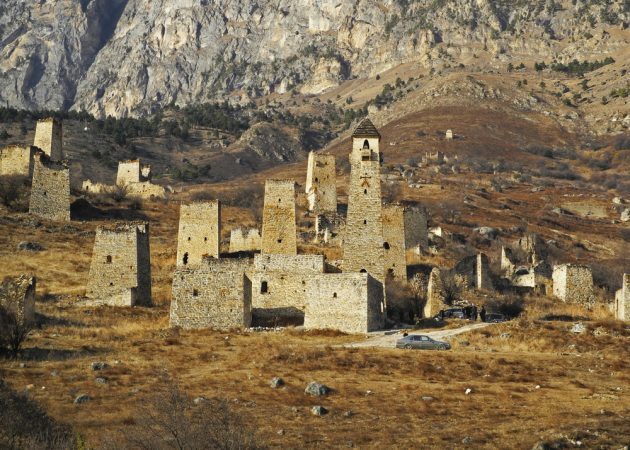 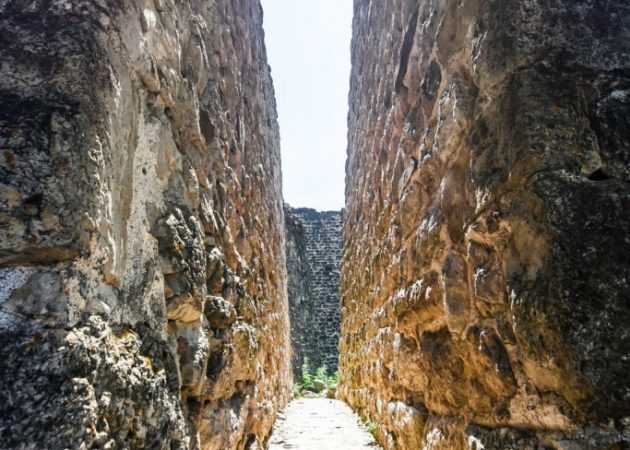 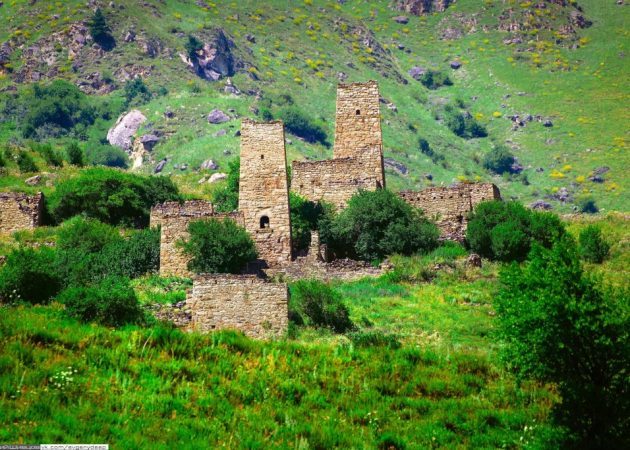 In addition, a tour of the Egikalu can be combined with a visit to a sports or cultural holiday, which are held there annually.

So, in 2012 in the Republic of Ingushetia Dzheyrakhsky District held an international tournament in mixed martial arts "Battle in the mountains." Battles take place on the rings in the open air, and majestic mountains and medieval towers create a unique atmosphere.

The first tournament was held directly in Egikale, but the second "battle" was moved to a more spacious nearby village Targim too many spectators and participants gathered event. The tournament is usually held at the beginning of the summer. 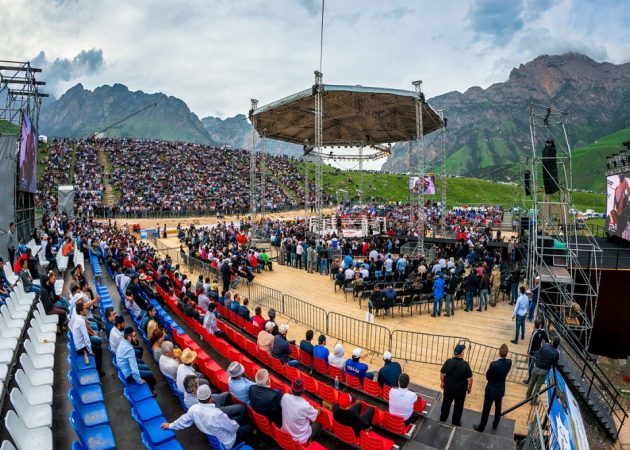 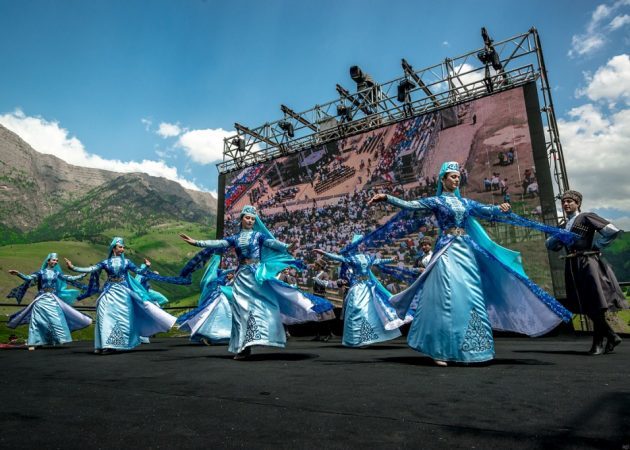 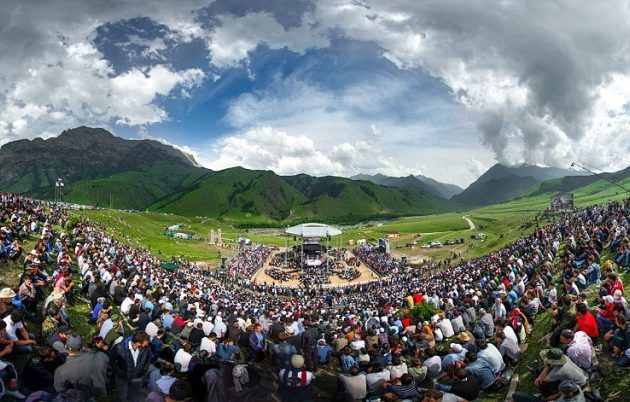 From Egikal came a lot of famous Ingush families. In particular, it is the native village of the famous Soviet writer Idris Murtuzovicha Bazorkin. His novel "From the Darkness of Centuries" is considered an encyclopedia of life of the Ingush people.

Idris Bazorkin died in 1993 and was buried in the family tomb in Egikale. In this regard, every year on June 15 (the day of his birthday) in the village held commemorative events dedicated to his life and work.

In short, people who are interested in the Middle Ages, the culture of the Caucasian peoples, and just loving the mountains, Egikal give many hours of exciting adventures.

How to get to Egikal?

Egikal is in Dzheyrakhsky District of Ingushetia and the administrative part of the Guli rural settlement. To get to this mountain tower complex is possible only by car. There are two routes.

The starting point - Vladikavkaz. First you need to get to the regional center Dzheirakh - E117 route, the Military-Georgian path. From Vladikavkaz to Dzheyraha shuttle bus, but then still have to change to a private car (for example, to hire someone from locals).

The road follows the republican road (P109) through settlements Lyazhgi, Olgeti and Guli.

This route is the most convenient and secure.

Ingush tower - this is an example of human genius. Hard to believe that these monumental structures were built without any construction machinery and accessories. Highlanders manually processed blocks of stone and built multi-meter tower.

Walking through the streets of this ancient Ingush village, could not help think how hard life was for these people. Nature unkind in the mountains, around the solid rocks to grow grain and raise cattle, had to work day and night. But they will not leave until they are expelled ... 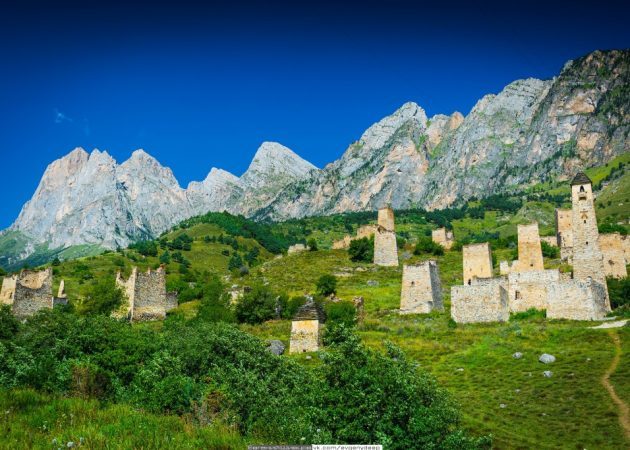 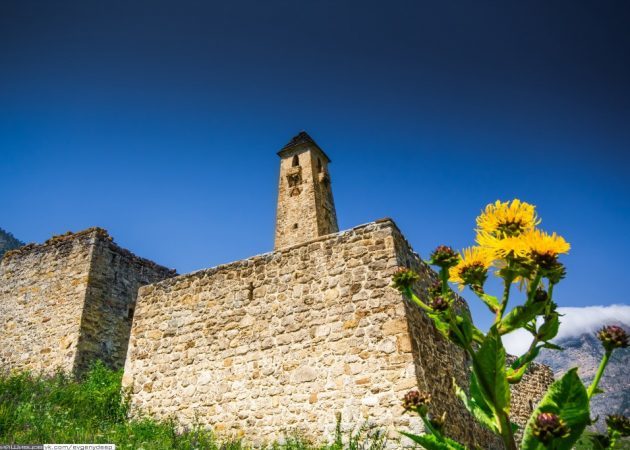 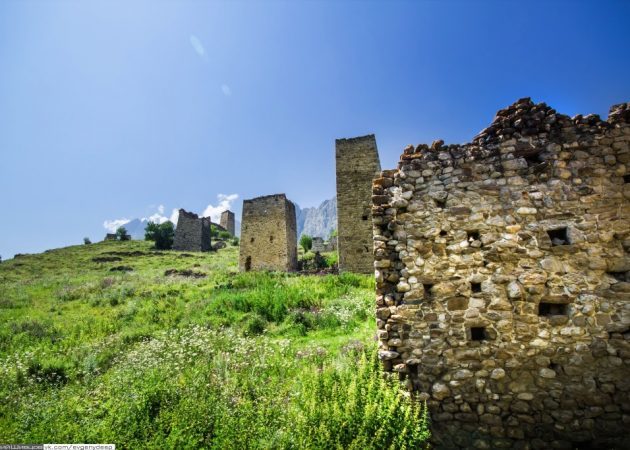 Egikal was inhabited until the mid-twentieth century. In 1944, on the orders of Beria Ingush forcibly deported from their native villages. After Stalin's death, people began to return home, but to settle in the mountains they are no longer allowed, only in lowland villages.

Given this, the striking fact that after decades of one person still Egikal back in. In spite of everything, he is living in his ancestral tower and even started the apiary. In addition, many Ingush families come regularly visit their Gala. Reverence for history and ancestors - one of the features of the Ingush people.

Recently Egikalu and other towers of the complex is given a lot of attention: it is a great recreational resource. Probably, soon there will be hotels and restaurants, pave comfortable hiking trails around these ancient rock castles. But until that happens, Egikal must see! You will be amazed of its greatness, and the inviolability of mind.

How to get rid of bad habits at work
Productivity