How to create a budget for the month and year: a guide with examples

The main task in preparing a personal budget - not just to reduce the debit with credit, and competently allocate expenses so that in the last week before the salaries do not have to borrow or live from hand to mouth.

Planning a budget can be special applications or any of the tables - the principle is the same.

How to create a budget for the month

As a rule, the main part of the salary is not issued on the first day of the month, and the 5 th, 10 th or 15 th. Therefore, it is more convenient to plan the budget is not a calendar month, and the period from paycheck to paycheck, for example, from 10 March to 9 April.

First, you need to record all financial flows to understand how much money you have. All sources of income should be considered: salary, bonus, part of money from renting apartments to rent, and so on. When volatile earnings, it makes sense to form the budget, you'll know exactly how much money have, for example, on the day of receipt of money on the card. 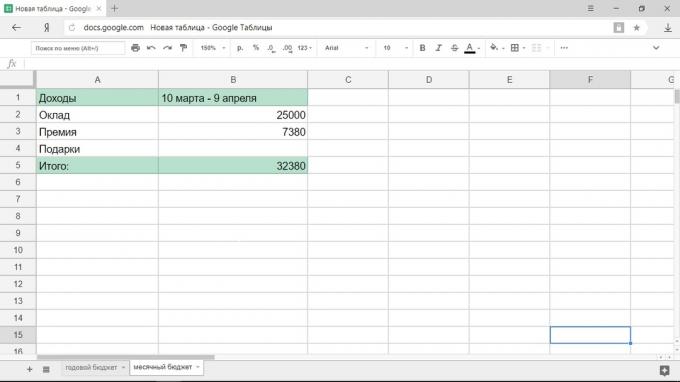 The first must be entered items of expenditure, without which it is impossible to ignore. This list will look something like this:

Naturally, the list of obligatory payments will be their for each individual and each family. The fare may change in the cost of gasoline. People with chronic illnesses will take into account spending on medicines. The same list will include mortgage payments, payment for kindergarten and so on. In this case, the traditional trip to the cinema on Saturday, and such articles are not required expenses.

Make it a rule every month to save money in a "stabilization fund." This can be a fixed amount or a percentage of revenue. 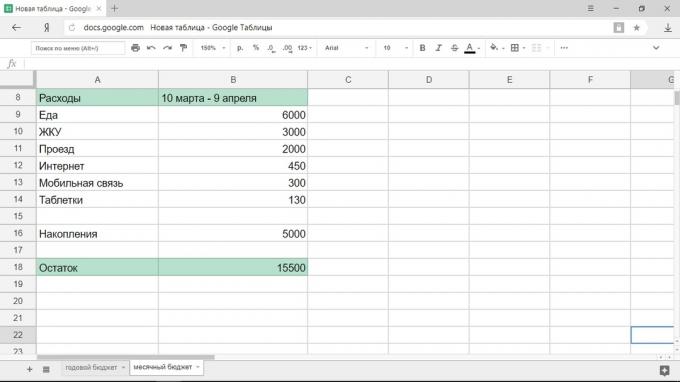 With remaining after deduction of mandatory spending amount you can proceed in two ways:

With the first method, everything is clear: you define that 3000 rubles will spend on cinema, as much again - on clothes and so on. The second method is worth examining in detail.

Let's say you have 15 500 rubles, and in the month - 31 days. So, every day you can spend 500 rubles. In this case, the required costs are already accounted for in the budget, so the money are only designed for a pleasant spending or force majeure. Accordingly, if you spend more than this amount per day, then go in the negative, and at the end of the month will have to tighten their belts. If you do not spend anything, for two weeks save up 7000 rubles, which can be spent on something big.

Remaining at the end of the financial period, the money can dissipate or be postponed. The first way is a nice, second - rational.

How to plan a budget for the year

Annual financial plan will require regular updating and expenditure, and income, so all the columns in it you need to create in duplicate: the forecast and the actual figure.

If you have a regular income

For a fixed amount of income you just fit into the profile of income salary and other stable revenues. The only thing that will interrupt the usual course of things - selling. Typically, before the holiday issue of money for the days during which you will have a rest, but then you will miss a certain amount of salary. But in general, at the stage of the forecast, especially if part of the budget for the first time, will be enough for all the months of use only the size of salary.

If you have unstable income

At irregular income, there are three ways to revenue forecasting:

1. Are you sure you will receive a monthly amount sufficient for life, although do not know its exact size.

Calculate your average income and use it to calculate. If you earn in any month more than the projected amount, move the surplus in the treasury. In it you climb if earn less than the average.

2. You do not have a steady income, and you are not sure what will happen.

As a basis for the calculation is better to take a minimum income. In this case, the budget plan will be puzzles with an asterisk, but the financial and surprises will not.

3. Part of your income is stable, but the exact amount is difficult to predict earnings.

For example, you receive a fixed salary, and the availability of premium depends on many factors. Then it is necessary to plan a budget so that a stable income covered all the primary needs, and the rest will be spending on the situation.

Do not forget to take into account the revenue that you get regularly: quarterly bonus (every three months), the return of the tax deduction (once a year) and so on.

For example, take a situation where a large part of the income is stable - it's salary. The minimum premium is 3000 rubles, and this figure will operate in the forecast. Also note that on the anniversary in August should give at least 20 000: 15 000 parents promised, friends certainly will give not less than 5000. 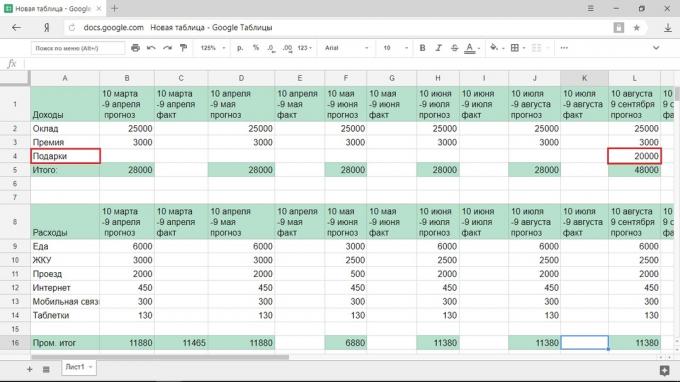 When planning your spending record in columns months compulsory expenditure: for food, utilities, transportation, mobile communications, household chemicals and so on. Please note that utility bills in winter more because of the heat, and for mobile communications, for example, in May you spend more, as going on holiday. These changes should be included in the budget.

Thus, in the example shows that in March, the heating season is over, so the last increased payment for utility services is planned for April. Also reflected in the May holiday. Compiled budget plans to go for three weeks to visit his grandmother. Tickets already purchased, so that the waste does not make sense to take into account. HUS is considered according to the standards and do not change.

At the same time, our hero during the three weeks will not spend money on travel. And the cost of food, he cut in half: it will be a week to eat at home, and will take over part of the cost of products at the grandmother. 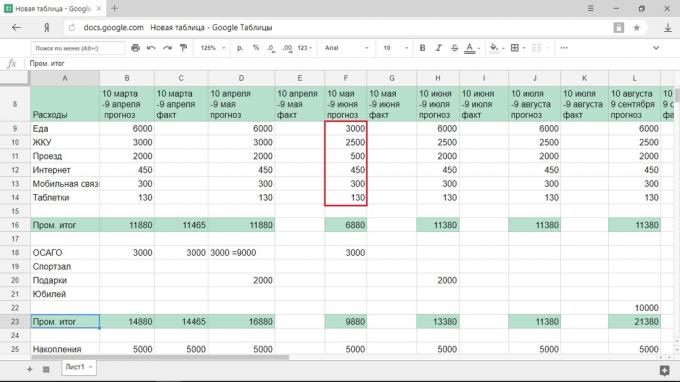 The next step - fixing mandatory, but irregular spending. For example, in May you have renew CTPIn November - to pay the tax for an apartment and a car, you have a vacation in May and in August - the anniversary, and in December, ending a gym. Separately consider the need to buy gifts for the holidays. 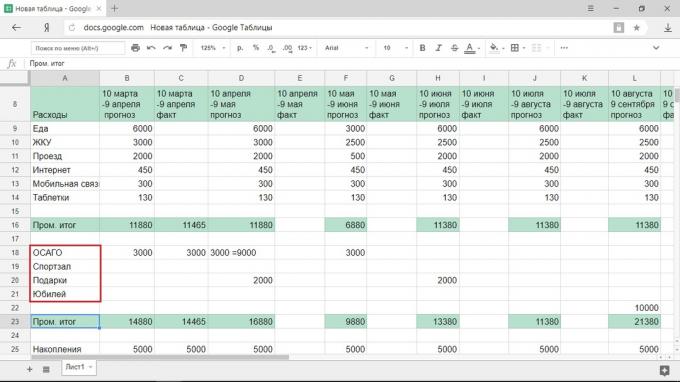 Big spenders can be scheduled in two ways:

Hero took the example of the first method for planning costs for the anniversary and the second - for the CTP. 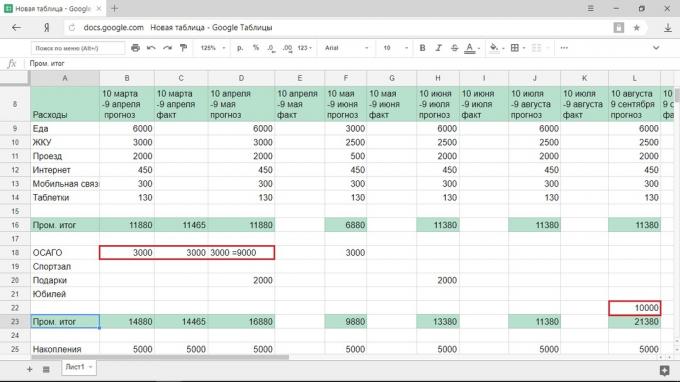 'Re considering accumulation to budget and to calculate a residue. In the example of entertainment, according to the forecast, it remains 8020 rubles (258.7 rubles per day).

Month after income from all sources will have to adjust the budget to determine the amount that actually have on hand. With the emergence of the information should also take into account the change in costs. 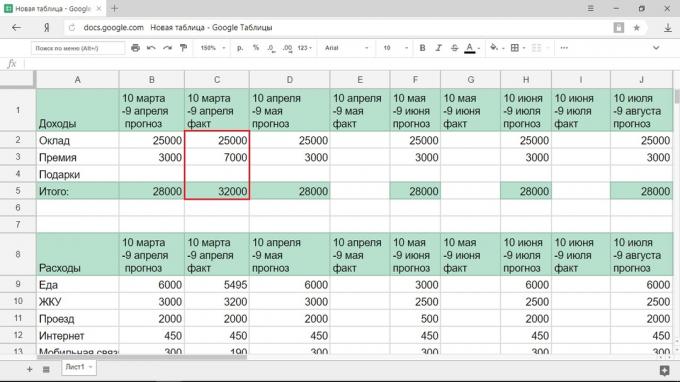 He also spent a little less on food and mobile communications, a little more - for housing services. In the end, after all compulsory deductions he remains 12 535 rubles on hand (404.3 rubles per day), which is almost two times more than the previous result. 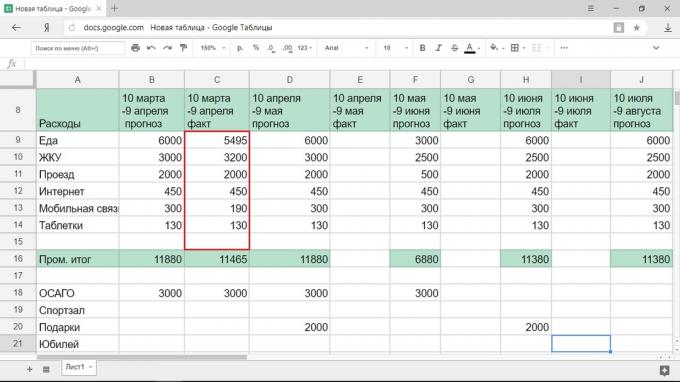 It is worth remembering that even if you are extremely disciplined adhered financial plan drawn up taking into account all the details, the circumstances are serious to adjust the budget. Job loss, and increase salary increase, Birth of a child - all these require the introduction of major changes in the financial strategy. But even bad budgeting is better than none at all.

A biopic about Steve Jobs remove studio, creator of the hit "The Social Network"
Makradar Technologies

I print it: printing photo books and calendars directly from iPhoto
Makradar Technologies

Spy Cam: use iSight as a camera for video surveillance
Makradar Technologies