Unique places in Russia, about which you are unlikely to hear: Kucherla lakes

Most of the Russian population lives in the plains. Mountains of us usually are not just far away and very far away. Meanwhile, in our country, more than 2000 mountain peaks.

Greater Caucasus, Ural, Sayan, Kamchatka - ridges and hills, as the fence surrounding the southern and eastern plains area. The top 72 in Russia are higher than 4000 m highest of them -. Elbrus (5642 m). And one of the most beautiful mountain ranges is considered to be the Altai. Its complex system of ridges stretches almost 2000 km and in some places up to 4500 m above sea level.

Hundreds of thousands of years ago the Earth had not yet familiar to us relief. But the tectonic faults and glacial descending like a rough brush strokes, nature painted objects on which we are now looking with a sinking heart.

One of them - the Kucherla lakes. They are located in the Altai Mountains, in the upper Kucherla river (a tributary of the Katun). Administratively, these places belong to Ust-Koksinsky District of the Altai Republic.

The group includes three lakes Kucherlinskoye water: A large, upper and lower lakes. The last two are not of such magnitude as the first.

Both are located on the north side of Katun ridge. On its slopes there are about 400 glaciers, and dozens of lakes and waterfalls of glacial origin. Pearl among them - the Big Kucherla lake. 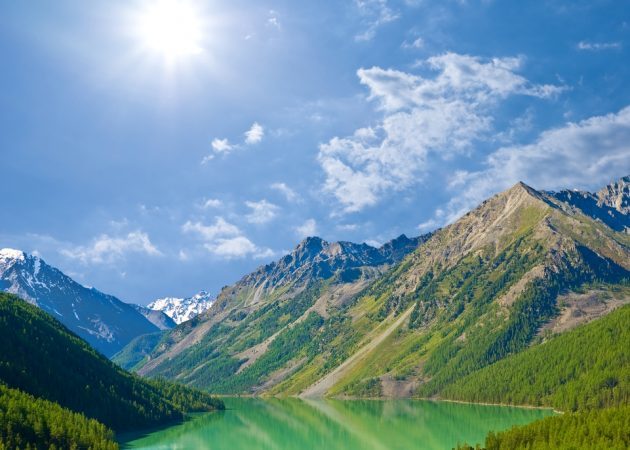 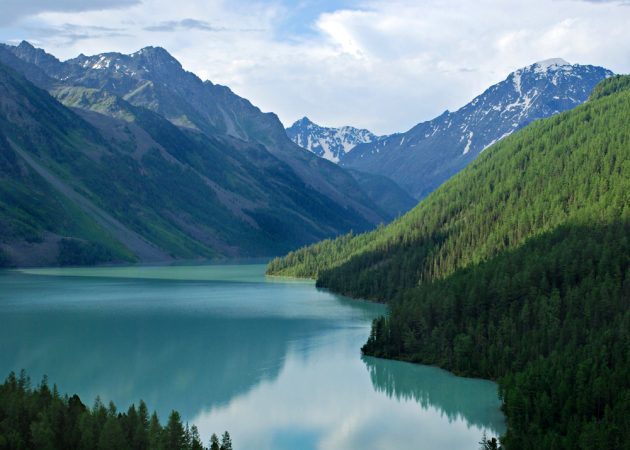 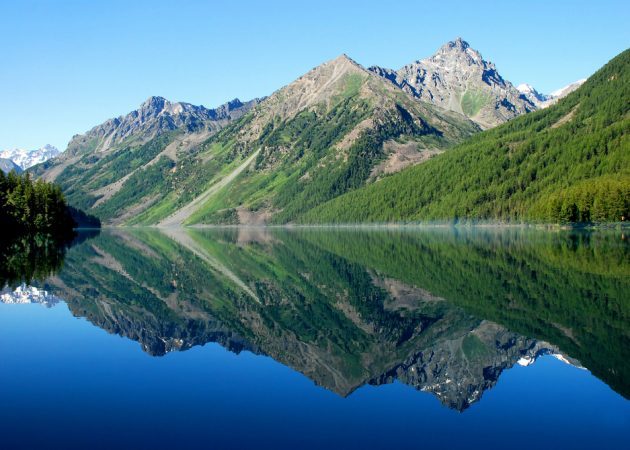 It is surprising that such a large body of water is not in the plains and in the mountains. From the west and east of Big Kucherla lake like a vise, surrounded by mountain peaks, sometimes reaching 3000 m.

In the south of the lake rests in the river Kucherla, and in the north - in the glacial moraine, the place where the glacier, vsporovshy land stopped.

Morena - is a complex glacial deposition, which is a mixture of clay, gravel, boulders, brought by a glacier during the movement.

Basin, the rest of the glacier movement, is now the bottom of the Big Kucherla lake. Its average depth is about 30 m, but in the deepest places, it reaches almost 55 m.

On the glacial origin of the lake and says the color of water. Matte-turquoise hue creates a mineral slurry, which is almost never settles on the bottom. However, depending on the weather lake can change color - sometimes it becomes dark gray.

The climate does not spoil warm: average temperature in July in the Greater Kucherla lake about 14 ° C. At night, even in summer frosts occur.

But neither inaccessibility or unkind weather did not stop those who want to see the Kucherla lakes.

Things to do in Kucherla lakes?

Beauty Altai mountains is not for travelers who are accustomed to comfort. Season visits Kucherla lakes lasts from May to mid-September. Reach them on foot or on horseback. Horse transition takes several hours (more on this later), and the foot - about two-three days.

If you decide to look at Kucherla lakes, remember: you are waiting for a serious hike with a heavy backpack, cold Overnight and long transitions. The route is quite difficult: almost always have to go up the hill, quite often the case of rain, eroding path. Be prepared for wet clothes and annoying insects. But hikers, no matter what, will be satisfied. Altai unique nature and fresh air far outweighed the difficulties.

Nature Kucherla lake is really unique. This is confirmed by the fact that they are on the territory of the Nature Park "Belukha", established in 1997.

Natural Park - site of natural landscape, located in the jurisdiction of the Russian Federation. For his visit does not require special permissions.

The natural parks are special protection regimes. So, at the foot of Belukha (the highest mountain of Katun ridge - 4509 m) are found snow leopards - snow leopards. These graceful predators listed in the Red Book of Russia, so hunting them is prohibited.

But you can get permission to hunt on the Siberian mountain goats, which come to graze in the local alpine meadows.

Altai alpine meadows - this is not an oxymoron. Kucherla lake shore Big hug the mountain peaks, between which lie the beautiful mountain meadows. Recent scholars are divided into alpine and subalpine depending on the altitudinal zones.

The journey to the Kucherla lakes, you can enjoy the modest beauty of mountain flowers and honeysuckle posobirat and cranberries (fruit in the vicinity of many lakes).

Of fauna, except for goats, you can find more gophers and pikas. The latter is particularly much. Be careful when getting up in the night: these animals are very agile, often gnaw backpacks of tourists in search of something tasty. 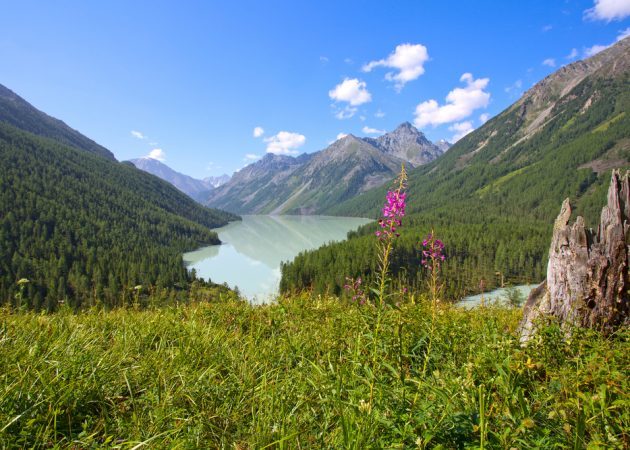 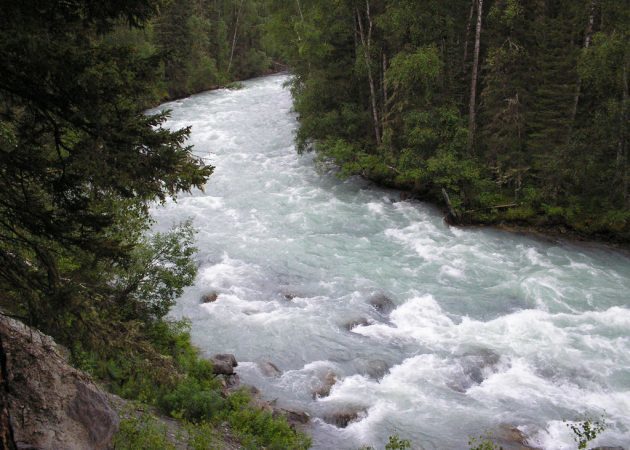 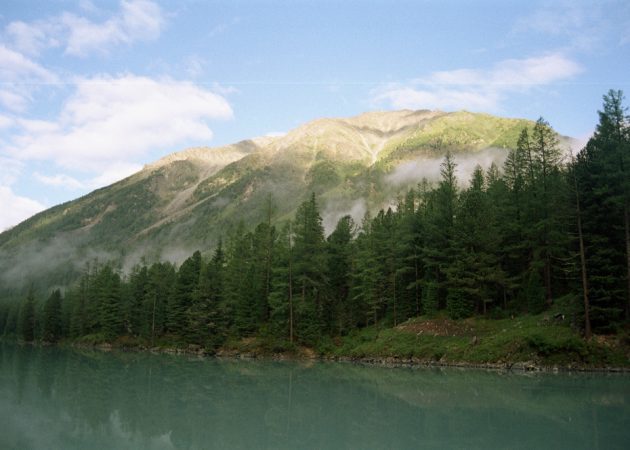 But the main wealth of Kucherla lakes, of course, fish! Are found grayling and rainbow trout (rainbow trout). Fishermen will be able to enjoy plenty of hobby, and those who have never fished last try. After all, what could be better than freshly roasted (personally!) Fish?

Hike to the Kucherla lakes - a great pastime for those who enjoy outdoor activities. But it requires a lot of physical strength and endurance.

If you prefer a tent and sleeping bag comfortable bed, do not worry - recreational resources in a nature park "Beluga" is also available. For example, near the village of Tungur there are several recreation centers, offering visitors not only comfortable accommodation, but also a shuttle to / from the major cities and excursions to the lakes.

In the vicinity of the Big Kucherla lake of the same name located hostel. There guests, in addition to natural beauty, reaching the "default", offers all sorts of entertainment: sauna, motorboats and catamarans rental, horseback riding, etc...

By the way, riding tours to the Kucherla lakes - a very common service in the Altai guides and travel agencies. A large Kucherla lake is usually only one of the stops. Tourists are offered 2-5 day itinerary for several attractions (lakes Darashkol and Akkem, Stone Town, waterfall Coney Ira, etc.). 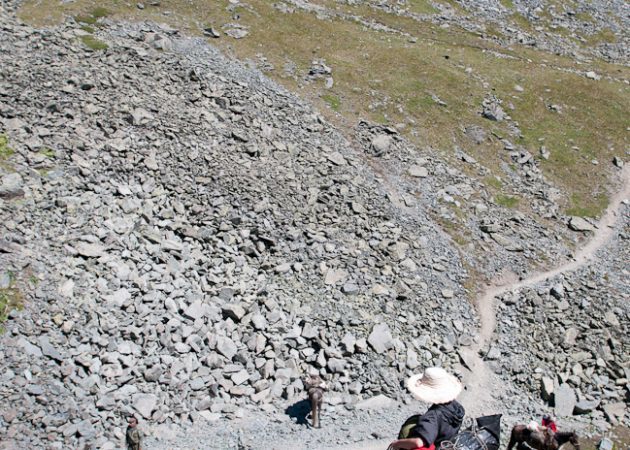 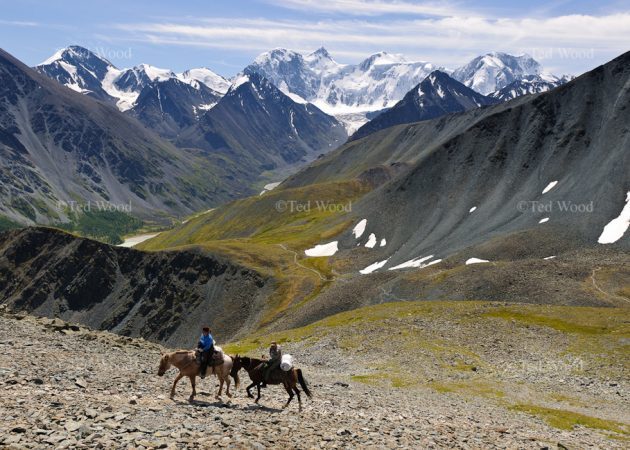 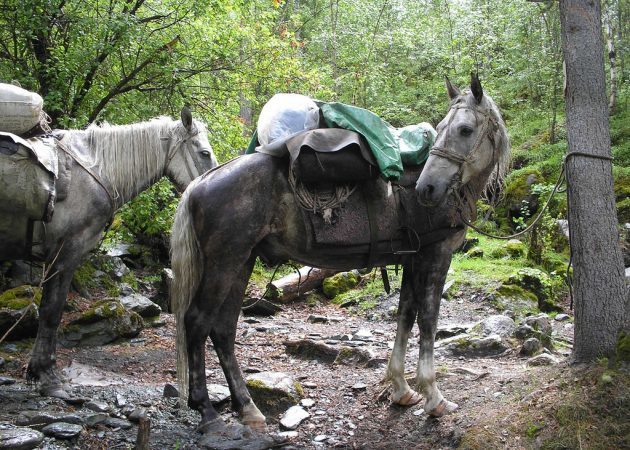 How to get to the Kucherla lake?

Attention! Hike to the Kucherla lakes - a serious event. If you have never been in the Altai, it is better to buy a tour agency or hire a guide (villagers Tungur willingly agree to be escort).

Closest to the Kucherla lakes settlements (about 40 km) - villages Kucherla and Tungur. The first is almost deserted, so all tourist routes usually start from Tungur. Therefore, the number one task - to get to it. Here there are two options.

Drive in Tungur by public transport from Gorno-Altaisk (capital of the Republic of Altai). In the summer time the bus runs every Tuesday, Thursday and Saturday. Will go almost 10 hours.

Back from Tungur to Gorno-Altaisk, the bus goes on Wednesdays, Fridays and Sundays.

More information about the schedule can be found here.

By car route to Tungur possible from the nearby large cities:

During the summer before Tungur, as well as from the village up to the Big Kucherla lake can be reached by helicopter. True, the fun is not cheap.

Why Go to Kucherla lakes?

Imagine the early morning, the sun's rays barely breaking through the teeth of the rocks, covered with cedar. You go out of the tent and breathe in the invigorating air. Around - silence. Only somewhere in the meadow sings a mysterious bird and heard a muffled noise of the mountain river. You go to the matte turquoise lake. It is smooth as glass; it seems you touch - crumble into a thousand pieces ... 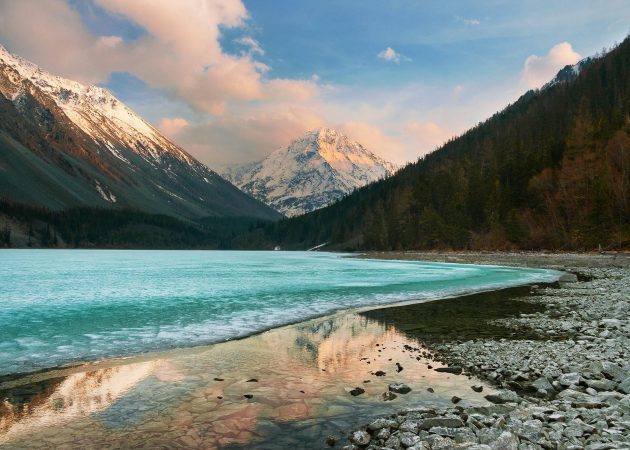 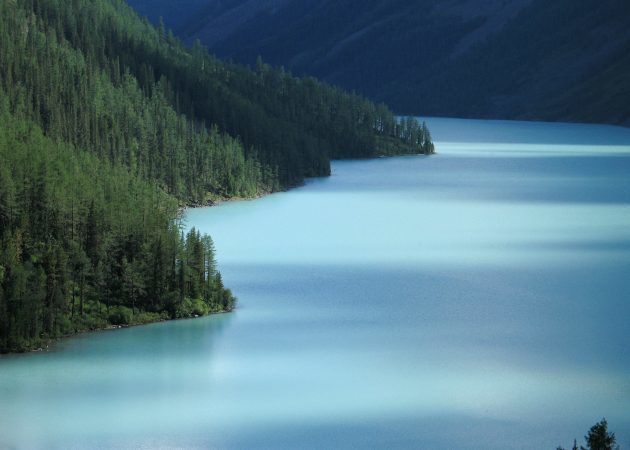 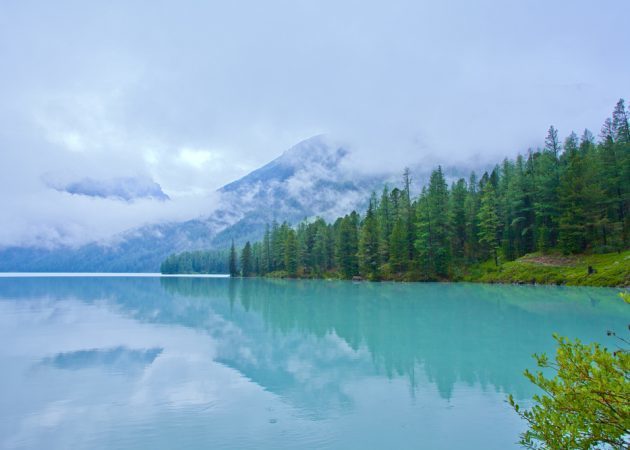 Sounds like a fairy tale, is not it? Kucherla lakes - a rare natural object, which creates a feeling of unreality. Life in places such flows by its own laws: not the people dictate the rules of nature, and it is to them. Looking at the clouds reflecting in the blue water of the lake Kucherla, in another felt time, the value of things and their place in the world. If you want to know a little more about yourself and the people who go hiking on the Altai.

5 obstacles to the goals that invents our brain
Motivation

40 Instagram filters: which to choose to turn a photo into a masterpiece
Android Ios