Unique places in Russia, about which you are unlikely to hear: Ivilginski temple

Russia, as a quilt woven from dozens of cultures. 142,905,200 people different from each other (in the 2010 census). Every corner of our country's distinctive due to people living there. In the south, color creates the Caucasian peoples in the Volga - Tatar, Mordovian and Chuvash, and in Siberia - Yakuts, Khanty and other northerners.
Today we are going to Buryatia, in the center of Russian Buddhism.

Ivilginski temple - a Buddhist monastery, is officially regarded as the center of Buddhism in Russia. Its history does not go back into oblivion. About him not composed beautiful legends. But all who have been there say that this place is magical.

Datsan - the Buryats is a Buddhist monastery, which, in addition to the temples, also includes the University.

Buddhism in Russia came in the XVII century. Before the revolution there were 35 datsans. But for the Bolsheviks religion, as we know, was the "opium" - discredited all denominations.

It turns in the war situation. If you ask, how did Ivilginski temple, the locals say, "Stalin gave." At the beginning of the war situation at the front it was so heavy that the soldiers and their commanders were glad of any help. Buryat Buddhists have collected 350,000 rubles (an unheard of sum for those times) and gave them to the needs of the army. It is said that in gratitude for this generous gesture, the Soviet leadership allowed the faithful to build datsan. 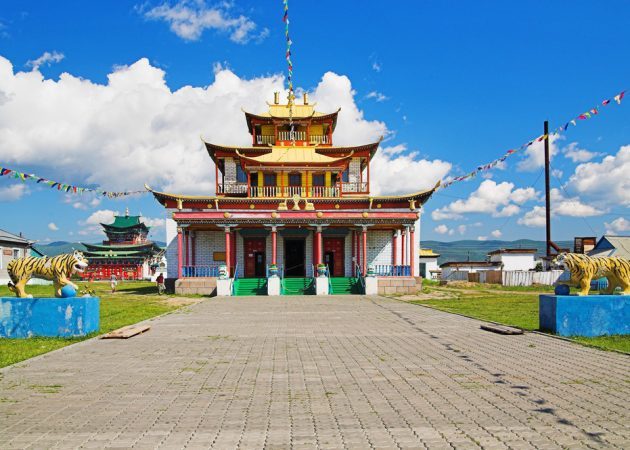 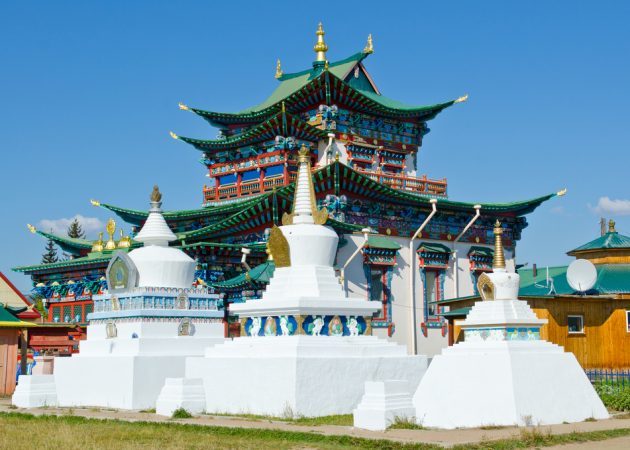 True or local fiction - is unknown. But the fact that in May 1945 the Resolution of the People's Commissars of Buryat-Mongol Autonomous Soviet Socialist Republic "On the discovery of the Buddhist temple ...", the fact remains.

... Monastery in Ulan-Ude, capital of Buryatia - is one of the biggest attractions that I have seen in the Soviet Union. It was built when Stalin was at the pinnacle of power, I do not understand how this could happen, but this fact has helped me realize that spirituality is so deeply rooted in the human mind, it is very difficult, if not impossible to uproot her… Dalai Lama XIV

Ivilginski temple began to build in the open field. First it was a simple wooden house, but gradually the efforts of believers monastery grew and transformed. In 1951, the government officially allocated land under it, and in 1970 and 1976. the cathedral church (arch) was built.

What to see in the Ivolga Datsan?

The temple was built in the Sino-Tibetan style: bright, colorful, with upturned corners of roofs. But while Ivolginsky buildings have unique architectural features. 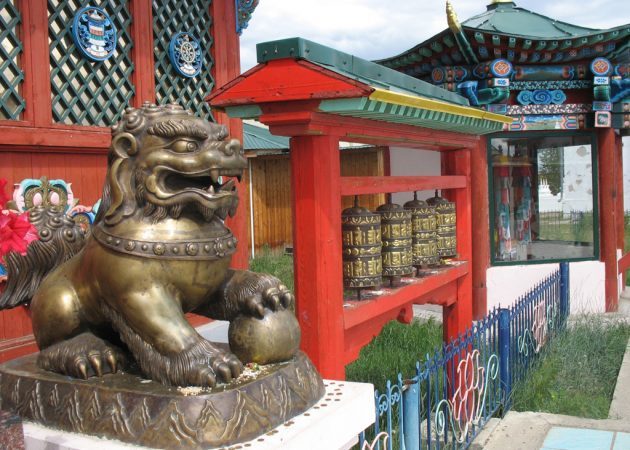 Firstly, in Buryatia, the basic building material - this tree. This differs from the arc Buryat Tibetan, which is usually built of stone. Secondly, almost all the temples in the monastery Ivolginsky have a "hallway": Tibet entrance to the temple is carried out directly from the street. It is because the severe winter in Buryatia and such lobbies protect Dugan from the cold.

A special place among the buildings of the monastery occupies a palace with the imperishable body of the great Teacher. It's about the Buryat religious figure, one of the outstanding Buddhist devotees of the twentieth century Hambo Lama Dashi-Dorzho Itigelov.

Itigelov was born in 1852 in Buryatia. The boy was orphaned early and at age 15 went 300 km to get to Aninskogo datsan there and become a novice. Itigelov spent in the monastery 23 years old, learning the spiritual and philosophical truths. After completing the training, he was actively engaged in religious activities, received the title of Master Teacher of all Buddhists in Eastern Siberia.

In the summer of 1927 Itigelov sat in the lotus position, and called his disciples. He gave them the last instruction (see him in 30 years) and fell into nirvana. So him and "buried" by placing the body in a cedar barrel.

30 years later, it was bequeathed, the novices went to visit Itigelov and found that for three decades remained incorrupt body of teachers. Subsequently it a few more times to get out of the barrel - the result remained the same. In 2002 Itigelov finally extracted from the ground.

The exhumation was attended by scientists. They took samples of hair, nails and skin Itigelov. Laboratory results shocked: not numb the tissue. Moreover, in 75 years the body does not deform Hambo Lama. Itigelov still sitting in the lotus position, llamas, caring for him, claiming that he is changing the body temperature, and even in the days of worship comes through perspiration.

See incorruptible can be anyone. But only eight times a year - during the great Buddhist holidays. The rest of the time available to it are only monks and (in extreme cases) official delegations.

Another important building in the territory Ivolginsky monastery - Buddhist University ( "Dasha Choynhorlin" - in the Buryat language "Earth happy teaching"). It was opened in 1991. Externally, the university is modest - a large wooden house.

Currently, the school enrolled about 100 monks, novices - khuvaraks. Day khuvaraks quite strict and ascetic life. At 6:00 the rise, from 7:00 to 21:00 - khurals and the study of philosophy, Tibetan, oriental medicine, iconography, as well as some secular subjects (logic, history, etc.).

In between classes novices prepare their own meals, clean their houses (simple wooden huts right on the territory of the monastery) and perform chores for datsans. After five years khuvaraks become lamas and secular receive diploma of education.

Lama - a religious teacher, a monk.

Join the life khuvaraks can each on Saturdays and Sundays teachers Ivolga datsan (Among which, by the way, there are the spiritual leaders of Tibet, Mongolia and India) lectures for all comers.

Things to do in Ivolga Datsan?

Familiarity with Ivolga Datsan should start with Goro.

Goro - in the Buddhist tradition is an honorary tour holy places.

Ivolginsky the territory of the monastery can be reached through the main gate (they are on the south side of the monastery), or small minor. The main entrance is open only on major holidays, other days by tourists and pilgrims are "spare" gate. Around the perimeter of the temple complex - a special track to commit Goro.

Bypass datsan you must make in the course of movement of the sun (clockwise). Goro can be done both independently and accompanied by llamas. Recent always friendly and happy to organize excursions for guests. The main thing - to make Goro odd number of times.

On the territory of datsan each sculpture, each monument and even decor element filled with deep meaning. Therefore, during the Goro should not hurry. Thus, during traversal will meet not only the arc, but the prayer drums (hurde). They definitely need to twist (also clockwise). Inside them are scrolls with mantras. The largest drum Ivolga datsan roll, where, according to Lamas, written 100 000 mantras - one turn like 100,000 a prayer. 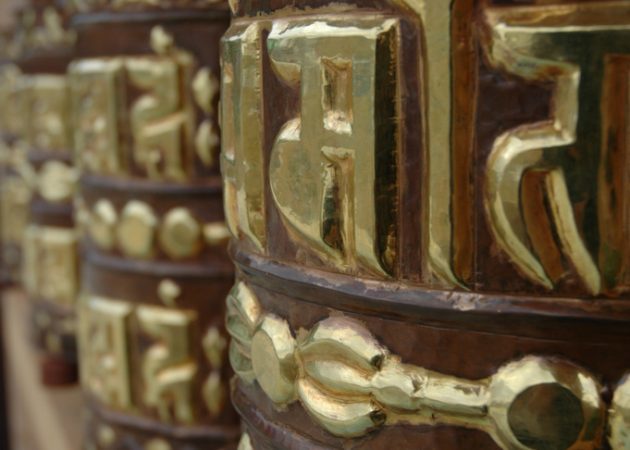 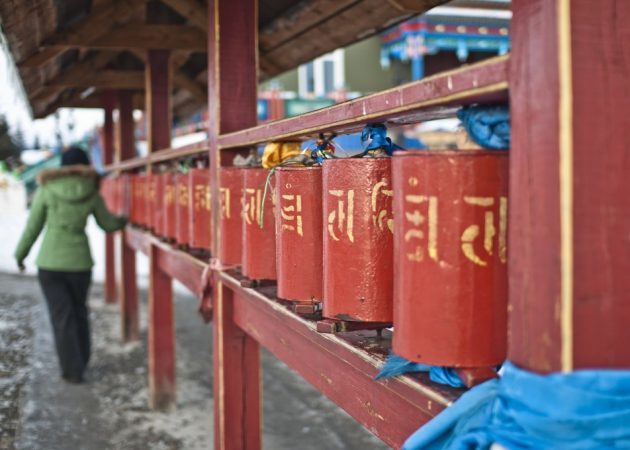 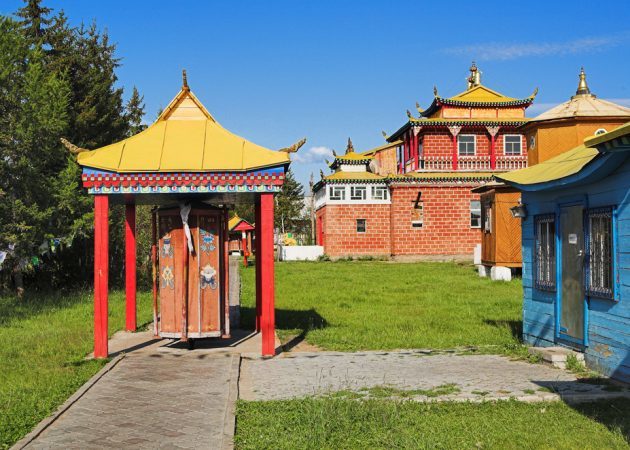 Also on the way to meet a quaint stone. According to legend, it was on the handprint Green Tara (goddess, quickly coming to the rescue). It is believed that if you move away from the stone a few steps, make a wish (necessarily good), pull hand forward and his eyes closed, go to the stone and try to touch it, then think certainly It will come true. If soboshsya way and you touch to something else, and not to the stone, the request is not destined to become a reality. 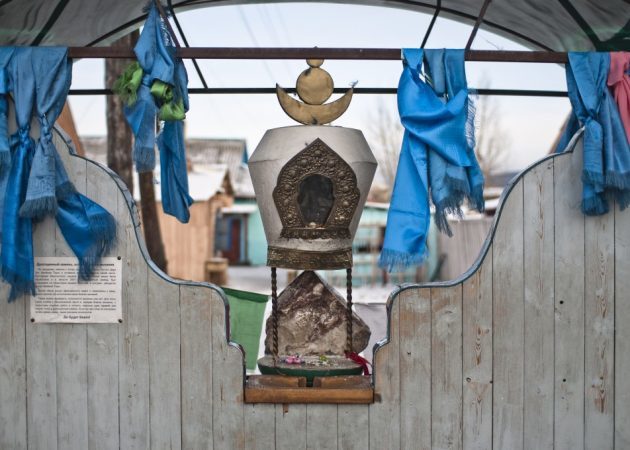 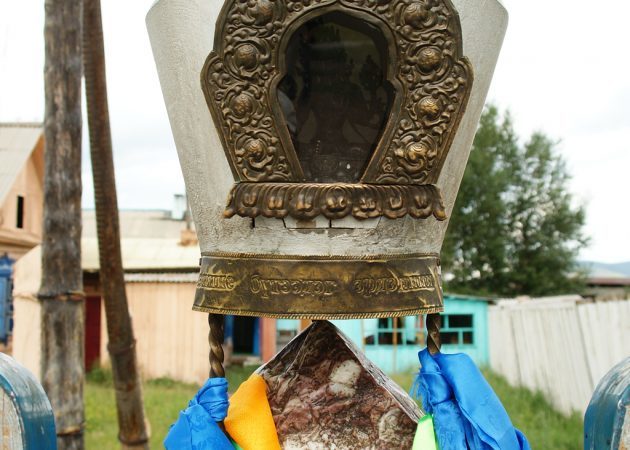 During Goro can go to any open arc, to attend church services. The main thing - to observe local etiquette. So, we can not turn our backs on the Buddha statues, one can not show the finger at them. Also on the territory of the monastery can not smoke, use foul language, do not speak loudly.

It should also look into the greenhouse where growing sacred Bodhi tree. This is one of the main symbols of Buddhism. According to legend, it was meditating under this tree, the Buddha attained enlightenment. Greenhouse Ivolga datsan more than 30 years, the first process brought once from India, the tree slowly grew into a small grove.

After Goro can go to a vacant lot for datsan, where it grows dry bush hung with colorful cloths. These cloths are called himmoriny.

Himmorin - a piece of cloth with a prayer; himmorina color depends on the year of birth of prayer.

Learn what you need himmorin, sanctify it, as well as to ask where it is better to hang, you can Lamas. Flap need to bind to a tree or bush, and every gust of wind will "read" a prayer for you. Himmorin symbolizes the psychic energy of man. Therefore, it is recommended to make this ceremony, when overcomes longing to revive the internal energy. 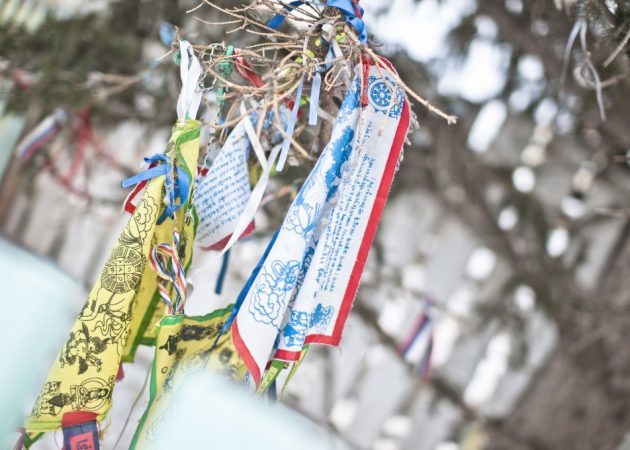 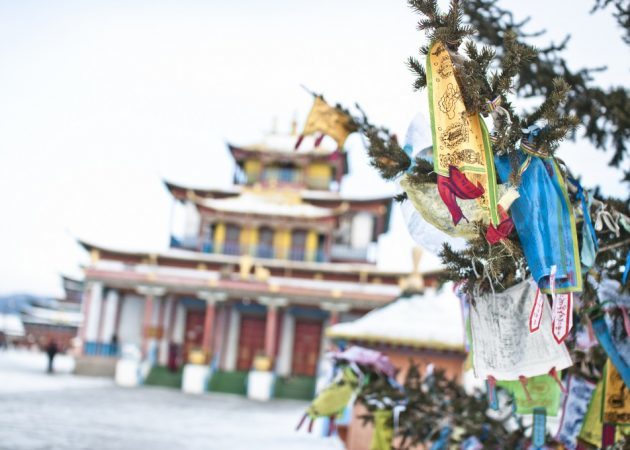 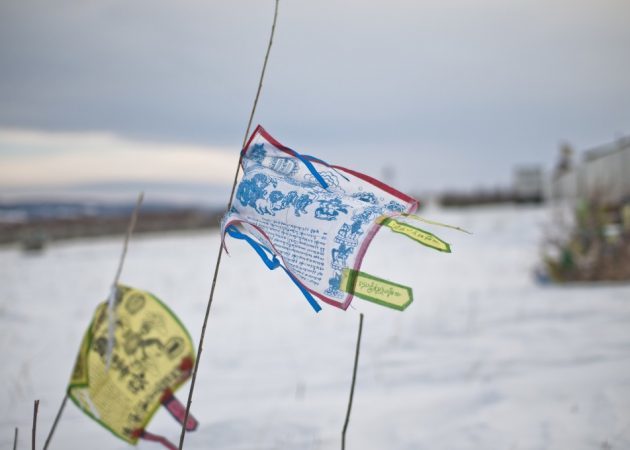 Apart from temples and religious monuments (such as stupas, suburgans), on the territory of Ivolga datsan is a museum of monuments of Buddhist art, a library, a café, a summer hotel and retail shops. Some of them sell Buddhist souvenirs, while others build businesses locals. They trade shawls, woolen mittens and socks. After talking with them, we can not only reduce cost, but also learn a lot about the Buryat people. The café serves national cuisine (postures, rice, etc.) - this is another way to join the Buryat culture. In addition, the space around such a distinctive, unlike the European part of Russia that the hands themselves involuntarily reach for the camera. In short, even people far from Buddhism, will find something to do in the Ivolga Datsan.

How to get to the Ivolga datsan?

Datsan is in the area of ​​Ivolginsky Buriatia village Outer Oriole, 8 km from the regional center (settlement Ivolginsk) and 35 km from Ulan Ude. So if you decide to visit Ivilginski temple, you must first get to the capital of Buryatia, and from there to keep the way to the Upper Orioles. There are two possibilities.

From Ulan-Ude to Ivolginsky shuttle bus number 130, which is 30-40 minutes will take you to the district center. From Ivolginsky to the village of Upper Oriole can be reached by taxi, which runs regularly there.

On major Buddhist holidays bus from Ulan-Ude goes directly to the datsan.

By car, from Ulan-Ude to Ivolga datsan is accessible via highway A-340 (formerly known as A-165) - "Kyakhtinsky path." The road runs through Ivolginsky, Selenge and Kyakhtinsky areas. a route like this: Ulan-Ude - Narrows - Nur Municipality - Lower Oriole - Ivolginsk - Upper Oriole. 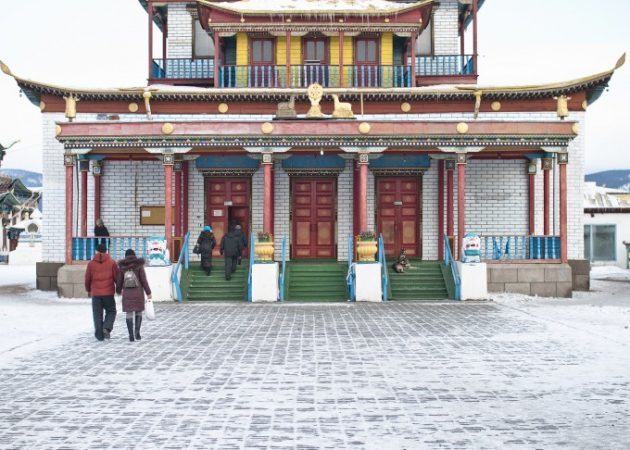 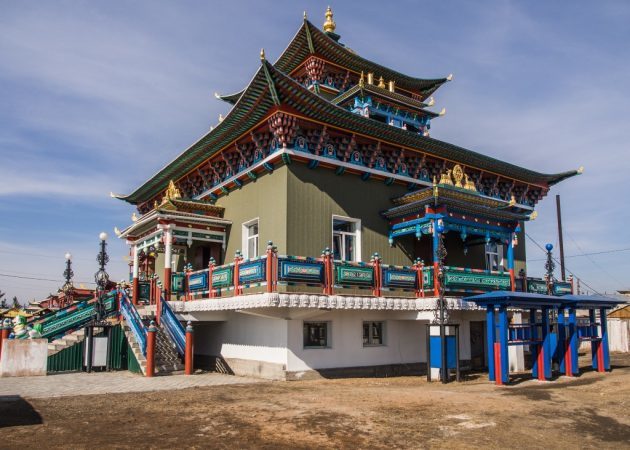 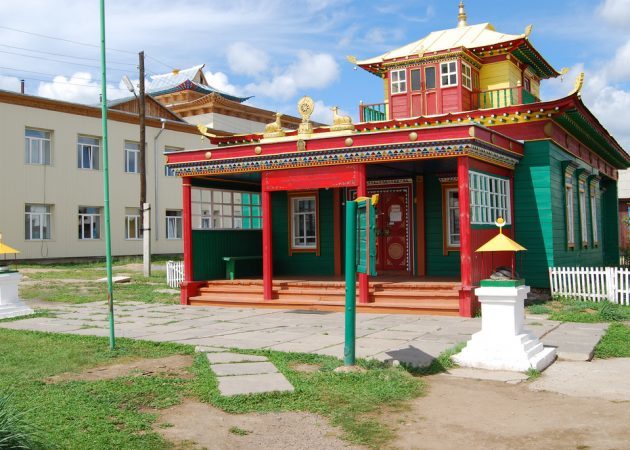 Why Go to Ivilginski temple?

Ivilginski temple - a great place to study Buddhism (the most ancient world religion) and Buryat culture. Despite the fact that the monastery is relatively young, it has the original architecture and unique atmosphere. This is the place where you can find harmony.

In the monastery, peacefully and calmly. Lama, each with its own specialty, welcome guests: Lama-astrologers make your horoscope and talk about the future; Lama healers say that you have a headache and how to treat it. In addition, they can be just talk, talk about their problems and get wise counsel.

In the Buryat name Ivolga datsan ( "Gandan Dashi Choynhorlin") means "Monastery, where revolves the Wheel teachings, full of joy and brings happiness." Those who visit datsan - whether Buddhist or not, - note that these are the feelings and feel - joy and happiness.

Learned man, divorced at 22,
A Life

Hackney your brain through meditation
A Life

Google Pixel 4 in the photo: the screen without the "bang" and three cameras
News Devices