Unique places in Russia, about which you are unlikely to hear: the island-town of Sviyazhsk

Russia - the largest country in the world. Its expanse stretched nearly 10 000 km - from Kaliningrad to Kamchatka. Russia - a country with an amazing history and culture. That is why we are launching a new special project, in which we will introduce you to little-known places of Russia.

The first stop in our tour - the island-town of Sviyazhsk with a rich history and beautiful paintings.

The middle of the XVI century. Between Muscovy and Kazan Khanate - a fierce struggle. Ivan the Terrible in that no matter what wants to conquer Volga.

Kazan Khanate in deep crisis. Virtually the only outpost of resistance to Russian troops, the enemy's superior in numbers and artillery - Kazan.

In 1550, Ivan the Terrible's army launched a second attempt to conquer the capital of the Kazan Khanate. Failed: too far from Moscow to regularly supply the troops with food and weapons. But back home, the magistrates have noticed in the middle of the river high hill with steep sides and a flat top (Kara-Kermen). On the "discovery" was reported to the king.

Terrible immediately appreciated the strategic value of a hill. Hill almost all sides surrounded by water; it is just 26 miles from Kazan, but the city can not see it. Ivan IV has matured cunning plan - to build a castle that would become a transit point for Russian troops.

Over 1000 km to the proposed Fortress in Uglich forests, the king ordered to build a wooden Kremlin. The commission fulfilled. In the spring of 1551, when the Volga thawed ice, the king commanded to dismantle the fortress, load the logs on the rafts and float to the Kara-Kermen.

May 24, 1551 Russian troops and laborers landed on the island. Work started: day and night, worked 75 000 people. Less than a month on a hill overgrown unsociable grew powerful military fortress, is larger than even the Moscow Kremlin. Following erected two churches - Holy Trinity and Christmas, as well as numerous outbuildings. The fortified town, first called "Ivan the city," and then - "Novograd Sviazhsky". 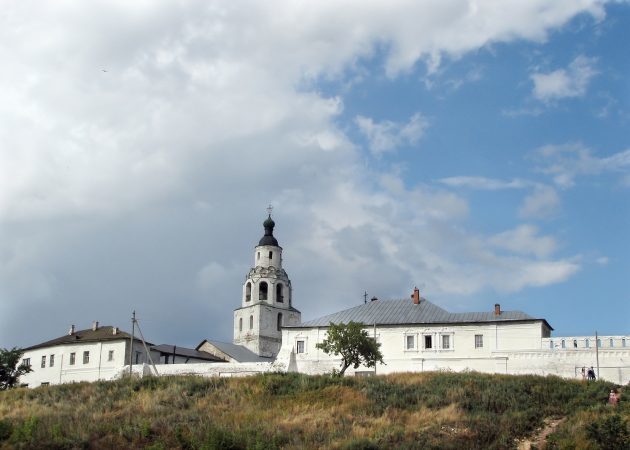 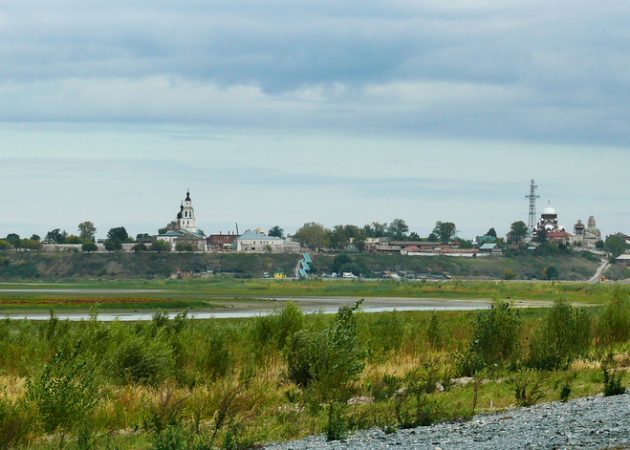 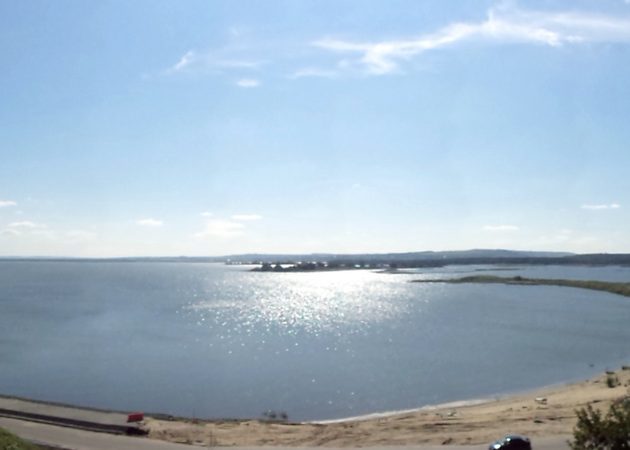 What to see in Sviyazhsk?

In the second half of the XVI century Sviyazhsk received the status of county town: the population grew, developed crafts, construction of new churches and houses.

By the beginning of the XVIII century, the town became a "monastery". All economic, political and administrative functions took over Kazan. In Sviyazhsk is operated two monasteries - Trinity Sergius (later - St. John the Baptist) and the Assumption. The city is considered a stronghold of spirituality and beauty.

Harmony destroyed the revolution. red terror began - In 1918, Trotsky arrived in Sviyazhsk. Executed priests, destroyed churches (from 1929 to 1930 killed six of the 12 existing in churches), close both the monastery.

In Soviet times, Sviyazhsk became a "city of unwanted people." In 1928, in the cells of the Assumption monastery housed a penal colony for troubled teens, and in 1943 - the NKVD camp. Later, these rooms converted into a psychiatric hospital.

Only in 1960, after the filling of the Kuibyshev Reservoir when Sviyazhsk become an island, it began its cultural and historical revival.

Today the island-town Sviyazhsk like a portal to the past. There is no public transport, industry and modern buildings - a beautiful nature of the Middle Volga and numerous monuments.

All on the island about 20 old buildings: some are well preserved, others half destroyed. Of the existing structures: the Assumption Cathedral (1556-1561 gg.), The bell tower of St. Nicholas Church (1556), Sergius Church (XVII century), Constantine and Helen Church (XVI-XVIII centuries.) And others. 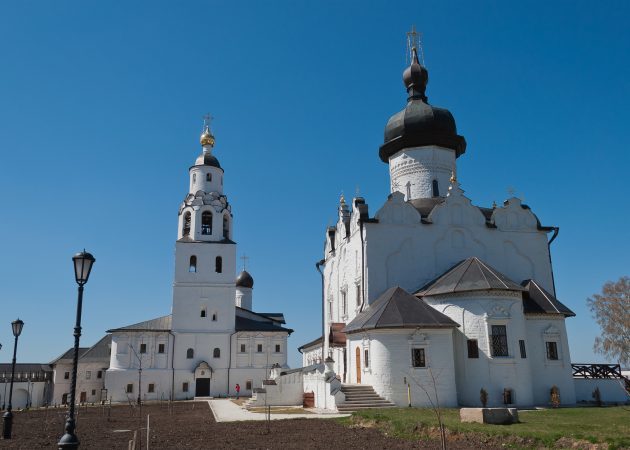 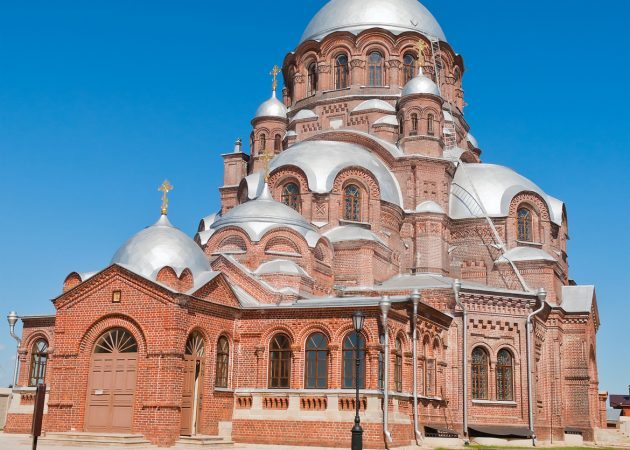 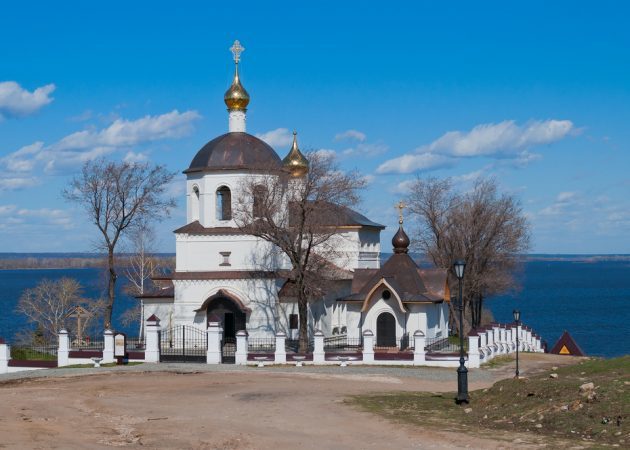 The pearl of the island is the Church of the Trinity (1551) - the first Orthodox church on the Volga and the only building that survived from the time of Ivan the Terrible. It was constructed out of huge logs of larch without a single nail in just one light day.

Of course, we finish building the church. In the XIX century canopied replaced by vosmiskatnuyu roof, built a porch, and the log walls sheathed tosom and painted... then looked temple bloklo and inconspicuously.

But in 2009 he decided to return to the historical appearance: removed the paint, built a wooden terrace. They left only tos (probably to protect the ancient logs from rain and snow). Now, not only inside but also outside the Trinity Church exudes the atmosphere of the era of Ivan IV. By the way, at the entrance of him a bench, where according to legend, the emperor sat himself Grozny.

Things to do in Sviyazhsk?

As in other historic places, the main "entertainment" in Sviyazhsk - visiting architectural attractions. This can be done both independently and using the services of professional guides.

So, many of these activities carried out by state historical-architectural and art museum "Island-town Sviyazhsk" (program for 2014 can be found on their official website).

In 2012, after reconstruction was opened Stables, the construction of which dates back to the XVI century. In Tsarist Russia, he served as an inn for visitors, and in Soviet times - hozblok. Now Stables - is an ethnographic center where you can experience the atmosphere of antiquity.

On its territory organized craft villages where you can observe how the forge horseshoes, make clay pots and weaving fishing baskets.

By the way, fishing - one of the main activities of the locals to this day (even on the arms of the city - the fish). This is understandable: no industry, little room for agriculture, but plenty of water.

Svijazhsk stands on the site where Sviyaga river empties into the Volga; navigation begins in April and ends in October. Almost all the local inhabitants have a boat - in the summer the Volga shore literally strewn with fishing fans.

"Hunt" for pike and bream come even from other regions. Men joke: "Sviyazhsk - ideal for fishing with his wife. She - the city on the tour, and you quietly waiting for biting. "

How to get to Sviyazhsk?

Previously, access to Sviyazhsk was only possible on the water. But in 2008, we built a dam with an asphalt road, which connected the island with the "big land". Now you can get to the village as the river and the road.

In addition, you can swim to Sviyazhsk on a motor boat or a boat from nearby Vasilyevo or Vvedenskoj Sloboda.

Sviyazhsk is located 30 km from Kazan - 40 minutes by car. You can find directions on the Internet or use the navigator. But in the village by car is not vedesh - car parking is provided at the bottom.

From Kazan Central Station trains run regularly to the train / railway station of Sviyazhsk, which is 14 km from the island, in the village of Lower Vyazovye. From there to the island-town can be reached by a ride or taxi.

Why Go to Sviyazhsk?

Sviyazhsk - a small island, cuddle mighty waves of the great Russian river. In 1833 Sviyazhsk visited Pushkin. Since then, there is a legend that it was his mean poet, describing the island of Buyan in "The Tale of Tsar Saltan". Of course, this is just a legend (about Swan Princess Alexander wrote in 1831), but it is easy to believe, because Sviyazhsk really fabulous island. There want to wander between churches and dilapidated houses, enjoy nature, stand on the shore and think about the past and the future.

Sviyazhsk - a tiny village where most of the population - the elderly, but the stories are the envy of many world cities. Over 15 years, this place claims to be included in the UNESCO World Heritage List. Federal and local authorities are doing everything to Sviyazhsk became a "world heritage". But many of those who visited the city (not tourists and connoisseurs of history), noted that the restoration work sometimes carried out roughly, with no respect for historical authenticity and respect for Russian culture (if only it was like something old). That's why Sviyazhsk is a must see!... until it became a typical tourist ethnopark.

And finally, life hacking, if you want to feel the silence and grandeur of the historic island-city, go to Sviyazhsk in the fall or winter.

Which vaccinations should be done for adults
Health