How does one deal a day will improve your life

A client from a distant country once asked me: "Doctor, I have a particular person and do not like the fact that I can not touch, feel, see or hear. You tell me that my mind, my head, my unconscious not only have some kind of a different from mine, look at my life, but they can voluntarily and transparently manage my behavior, modify it and thereby influence my a life. To be honest, I did not notice this, and therefore have to trust you, why would I not want to. Could you give specific examples of how the control is so I can verify this myself, and know what it is? ".

I did not tell her about Freud and lead as examples of the dream ( "royal road unconsciousness") for one reason. Dreams - it's not behavior. I can infinitely prove to you that dreams have meaning and we are the creators of dreams, and we invest in them this sense. We do not go to bed with the thought that today should dream of something and then some, and "when he was on the couch I begin to hug and kiss, then opened the door, go down and ask my mother if I did not forget to stroke linen. " You, on the other hand, will be infinitely prove to me that dreams - just a series of disconnected and meaningless fragments of experienced events and memories in which distorted and randomly reflected last day.

Here is just one argument. On any objective approach to the analysis of dreams can talk when we see that ten analysts, independently of each other analyzing individual dream, make absolutely identical conclusions, but these findings will lead identical recommendations and these recommendations will lead to identical results. I have yet to such a miracle is not heard.

Ten botanists from different countries to see wither plants, theoretically should come to the conclusion that the plant is not enough water, and that it needs to be watered. Then they need to water it and plant objectively through some time should be better.

Ten doctors to see a set of specific symptoms should be based on this put a specific diagnosis and to propose specific methods of treatment, the variations of which will depend again on the specific details.

But not so in psychoanalysis.

I can not say I fully studied all the existing professional literature, but I have never met publications that were to the results of a comparative study of the views of a few dozen analysts in respect of the same specific dreams. I believe that if such data were, they would be included in all basic guidance on psychoanalysis. But no.

Therefore, it seems to me that the dream-books readers can claim a greater base on the scientific approach. They even do not have disagreements in the interpretation: if dreams lost tooth - it is a loved one's death, and if the excrement - to money. "Unscientific" in the dream books begins when asking a question: "Why?". But we are too far from our subject. We go back to the client.

I offered her another way. He is absolutely concrete, practical, tangible and known. I have repeatedly written about him. And not just me. The only thing I have always stressed that the main value of this method lies not in the fact that he is credited not to systematize and organize their lives. Its main value is that it allows a person to determine exactly how he had "everything is bad with a head" as he controls his behavior, his life, and "someone who is dancing."

What is this magic method? I tell. This system "plans for tomorrow."

In its most basic form it looks like this: during the day you plan the next day, one small-small business, which has long needed to be done, but you can not do much more per month or year.

This case should not be mandatory, so you can him to do or not to do, it must be small (on his execution does not need to spend more than an hour), a simple, absolutely feasible, and its implementation should depend only on you.

You can not plan to stand up in the morning and go to the bathroom - you do so. You can not plan to learn conjugation hundred French verbs the third group - it is not possible for the day. You can not schedule a meeting with a friend or rent clothes to the dry cleaners - one can not come, and dry cleaning can be closed. The plan should be useful, optional, a simple, non-durable and workable.

Then the next day you have to carry it out and plan the next day another. And so every day. For failure to plan for the most by any valid reasons as well as for forgetting his plan, as well as for forgetting what is planned, you assign yourself a fine of one percent of the total monthly income (including all sources income). Total for the month in the worst case you can lose thirty percent of their monthly income. Not fatal, but the bite.

This system has always been described as a tool to combat procrastination (procrastination), as a tool of "the conclusion Gestalt "(a series of behavioral acts) and as a tool for the phased implementation of large and complex cases, allowing to" eat the elephant parts. " With all this I agree, but I do not agree that it is - the main thing.

I believe that the main advantage of the system "plans for tomorrow" is that it allows through concrete actions to see, identify and understand the extent of uncontrollability of his mind, the degree of lack of control of their behavior, to see and understand as something other than "you" interfere in your decisions and your runs behavior.

The introduction of this system in the life resembles throwing sticks into the water flow. If you sit on the shore of a large and slow-moving river, it is not always clear: in which direction it flows.

To understand, you need to throw a stick in the water and its movement to determine the direction of flow. So it is here.

"Plans for tomorrow" - is "atomic" system. Less they have nothing.

Watch out for your hands. You yourself are planning the next day what you need? Yes. It does not need a neighbor, not the husband, not the wife, not the boss, it is necessary for you. It is necessary for you for a long time? Yes. You can do it tomorrow? Yes. It's easy? Yes. It is up to you? Yes. If you do not, then "you get over the head" - will have to pay a fine? Yes.

And if you agree with all of this and are 100% sure that you can cope with the implementation of the "Plan for tomorrow," try. Less than five percent of the people, in my experience, to cope with it. In 95% of the people without any problems agree to the introduction to his life, "plans" of the system, but quickly discover that for some quite inexplicably forgotten something plan, forget it's something to perform and, of course, forgot to pay the penalty for forgetting and failure to comply.

And the question here is: if yesterday "you" made the decision that the "plans" - the perfect solution to your problems of procrastination, then asked, "who" Tomorrow is a decision not to fulfill, and devalued canceled?

It was your unconscious, which he did not argue at that moment, when you agree to comply with and when you were sure that you can fulfill them. It did not argue when you have something planned in the evening. It reacted to you as an irrational child that tomorrow was going to fly into space. Because parents will not argue with your child and try to dissuade him. They just say the evening "Sleep, little", and in the morning say, "Get up, go to kindergarten. Flight canceled due to technical reasons. "

The system of "planning" to determine the "who is who": you or your subconscious is you.

And there is almost no room for maneuver and the dual interpretation. You have something planned, willing and able to do it, but you do not (!) Tomorrow is canceled, forget and somehow magically do not perform.

This does not mean that you do in life will not happen pleasant moments and even to achieve, but it will not be your achievements in the full sense of the word. A man who floats down the river, may accidentally nailed to some pleasant and pretty place, and he even "can achieve something", but it should not entertain the illusion that he runs his life and he takes solutions. Such a person feels in his life as a host and as a hanger, which sadly sits in the kitchen and asked, "Can we have dinner?". And not the fact that it is not fed. Feed, if a good mood. But she decides.

Ask yourself when you make a decision in the morning do not eat after seven in the evening, who this evening after seven says to you: "The interesting point of view, and now let's go eat, we have in the fridge delicious cakeWe were very tired today, we have no one likes, and can not live without the cake "in such a heavy night? Do you have an answer?

And now a nice conclusion, rather, a vital observation: people who through the work, stress, constant tears, and fines introduced into your life pseudosimple system "plans for tomorrow" for a few years have not only that, dreamed about, but even that, what dream does not could. 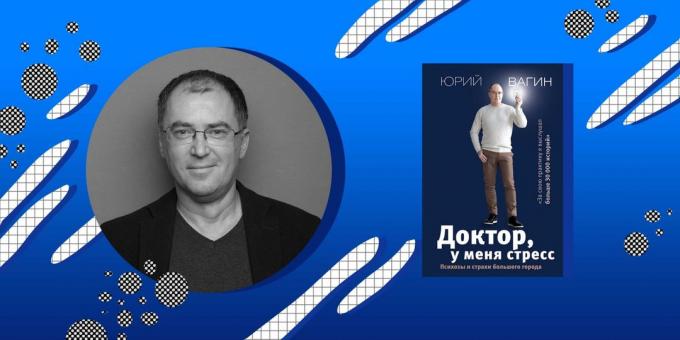 Yuri Wagin - PhD, a psychotherapist with 30 years of experience, the author of articles, books and the popular psychology. During the years of practice doctor helped dozens of people to understand the causes of their problems, and showed how to organize their lives, to make it the most happy.

In the book, "Doctor, I'm stressed. Psychosis and fears of a big city, "says Wagin, and where are the consequences of the stress and exhaustion, how to fight them, and where to draw power for productivity.

To buy a book