Historical drama and author's style: why you definitely need to see the movie "La Favorite"

It would seem that, historical films of all ages are now coming out very much. Among them are both brutal and explicit scenes and romantic melodrama and even comedy.

But Yorgos Lanthimos was able to show the story in a unique way copyright, and therefore "mistress" logical to put on a par not with traditional costume dramas, as with previous works director.

A surprising look at the era

Previously, Yorgos Lanthimos not touching stories from the past, preferring either realistic or almost fantastic pictures. For example, in the film "Fang" he showed family history, living only in your own home, almost no contact with the outside world.

The "lobster" director presented dystopia where lonely people in the shortest time necessary to find a mate, or they turn into animals. And in "Killing a sacred deer"Complication seems simple family drama, but then all the action takes on a mystical connotation.

In the "Favorita" Yorgos Lanthimos also decided to show the underside of the era of beautiful costumes and dances, offering all romantic-minded people to see how in fact is life in the XVIII century.

So, one of the main characters Abigail (Emma Stone) appears in the palace, all smeared in mud: it pushed out of the carriage playful mood companion. Servants are raped, did not hesitate to outsiders, but the disease did not know how to treat. 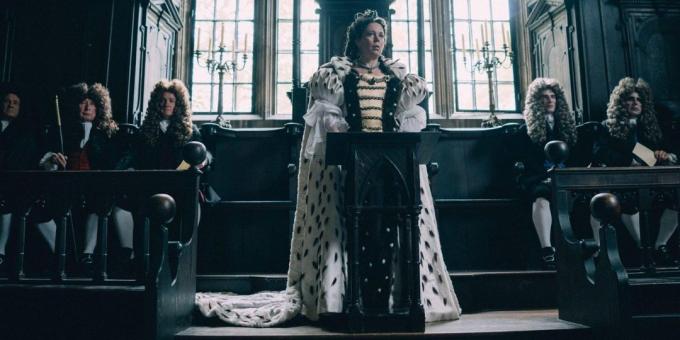 And at the center of almost distraught and no longer able to walk without assistance Queen Anne. Formally, it is still governed by the state, but in reality it takes a long time solutions mistress Lady Sarah (Rachel Weisz). The very same queen looks miserable.

Olivia Colman amazingly got used to the image of the monarch. If you think about it, her character should cause hostility. But the great acting of forces sympathize with the sick person, who does not notice that all around lie. Similarly, it does not realize that Abigail is moving closer to her only to get a place at court.

Epoch, which are used to depict the beautiful and elegant, the film shows the time Yorgos Lanthimos dirt, meanness and intrigue. Mistress of death bite for a place closer to the Queen, not forgetting the novels on the side, politicians only think about their own benefit and used personal connections. But Anna herself, like a symbol of a withering power, look at what is happening look foolish child. Visually Yorgos Lanthimos films can not be confused with the works of other directors. In the era of digital effects and complex processing it continues to adhere to the principle of maximum naturalism.

In early films this can be explained by small budgets: an independent Greek director simply did not have the ability to shoot otherwise. But the author did not change its approach and "Lobster"Where there were well-known Hollywood actors.

As a result, much of the film shot in natural light, and the lead actors do not make up, to show how they look in reality.

Yorgos Lanthimos also gave the actors an opportunity to think through their images. So Colin Farrell appeared and his weird mustache and hairstyle. "Favorite" embodies exactly the same approach, which is again unusual for a historical film, which is more likely to make the most vivid. But Yorgos Lanthimos and night scenes were filmed in a real dark. Light is given only torches and candles, which can be seen in the frame.

Sometimes it makes the image difficult to read, but it allows you to see how it looked in reality. And the fall of one of the heroines from the edge of the road perfectly illustrates the reality.

This approach is affected filming indoors. In order to truly convey the situation of the palace, the film was shot in real Hatfield House, where he once lived Edward VI and Elizabeth I.

But if you just look into the filming technology, it becomes clear that the width of the corridors of real estates would cause the director to shoot only a very short frames, the camera followed reaching people. Therefore, in the halls of the premises make much wider than necessary.

However, Yorgos Lanthimos and here goes the other way. He is, as before, takes long shots, just by using a wide angle lens. Because of this camera with sharp bends in the large hall, you can feel dizzy: the distortion at the edges creates a strong flickering. Sound or actually sounds in the story - for example, someone sitting at the harpsichord or playing in the garden of the orchestra - or reduced to a monotonic minimalism. The author does not clog the sound effects, adding it only to the most essential points.

But we must not think that the "Favorite" because it loses all the beauty of the historical epoch. Individual frames from a movie you can enjoy for a long time. Beautiful costumes and tapestries complemented by exquisite images actresses, at the same time deprived of bright makeup. Face Emma Stone looks a lot more natural than many other movies.

And when one of the characters gets a scar appears a beautiful ribbon on her face. Yorgos Lanthimos is able to find beauty in the ugly. On the other hand, can add an unpleasant aesthetic realism in images.

In his films, Yorgos Lanthimos often shows a very unusual human relationships, and sometimes they are on the verge of acceptable. In the film "Alps," he said about the people who pay for the "substitute" in the family relatives of the victims: to communicate in a theme, dinner, go to the movies.

The "lobster" characters trying to find a mate, while getting rid of sexual desire. But perhaps the most provocative look "Fang", where parents separate family called the son of a prostitute, and then even insisted on incest.

To avoid accusations of immorality, the director puts his characters in fictional worlds and scenery. Similarly, he refers to historical films. Yorgos Lanthimos consciously turned to history is not the most popular queen, to keep the space for imagination.

"Favorite" - not exactly historical film. This is fiction, which is based on real events, but does not claim to their literal retelling. Yorgos Lanthimos placed in the center of the story is not only the relationship of Anna and her lovers, but also an era PatriarchateIn which the Queen was able to surround himself with strong women. It is not confined to the proximity to the favorites of the ruler of the naive.

Relationships develop characters is very difficult. After all, first to the court poor Abigail leads is Sarah - the Duchess of Marlborough. Her husband at the time of the last went to war, and she shares the bed with a queen and takes political decisions. Abigail is flirting with Anna, do not forget to build their own future and is looking for a good marriage.

It's not a love triangle, but a much more complex figure with a lot of participants. How to dance at a ball, they regularly change places, and then themselves start to get confused, where do they move. 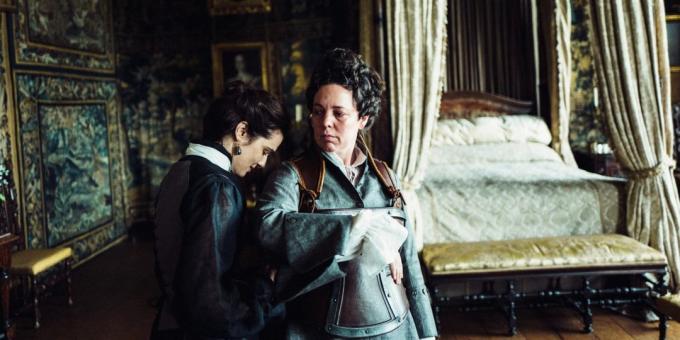 Unusual visual style and is associated with the feed. "Favorite" as the previous films Yorgos Lanthimos, when viewing causes a lot of different emotions.

He does not remove the pure cruelty or body horror, where the viewer has to frown all the time from unpleasant staff. And just not inclined to melodrama or romantic comedyThat cause a tear and a smile.

All the same, "Lobster" in a dark plot fell into the lists of the best comedies. And there really is something to laugh: a strange dystopia seems absurd, ridiculous, and the characters commit stupid acts. From previous work completely devoid of humor except that "Killing the sacred deer."

"Favorite" continues this trend. In this film a lot of humor. There is also a text jokes - often rival pin up each other. And there are moments farce until banal falling dirt and impact between the legs of the unfortunate gentleman. Sexuality and explicit scenes from Yorgos Lanthimos shown with deliberate realism, almost always devoid of grace. It does not give effect to avoid unnecessary eroticism and again reminds us of the realities of the era.

And you can not always see how funny becomes unpleasant, which, in turn, gives way to drama and tragedy. Thus, the scene where a naked fat man throw fruit, mounted in parallel with a very dark moment.

And this happens throughout the picture: funny replaced by dark, handsome - repulsive. This approach reflects the ambiguous characters. There is no division into good and evil, just about everyone does what he thinks is right.

Therefore, after viewing "Favorite" leaves a very strange experience. It is full of humor, and the film can be seen as entertainment. In this nice and frankly shows historical era, with all its shortcomings.

And underneath it all hidden away deep personal drama. And, above all, the story of poor Queen, who believed sincerely that at least someone loves her honestly and unselfishly.

God of light - a great game, in which the light will win the darkness
Makradar Games

Everything you need to know about the sapphire glass
Makradar Ios

Gifts for the March 8: 17 devices for beauty and health
Holidays Purchases