The reverse flow: what is it and how not to sink close to the shore

Forewarned is forearmed. If you are going on vacation to the sea, find out how to protect yourself from reverse currents carrying away hundreds of lives annually beach lovers. 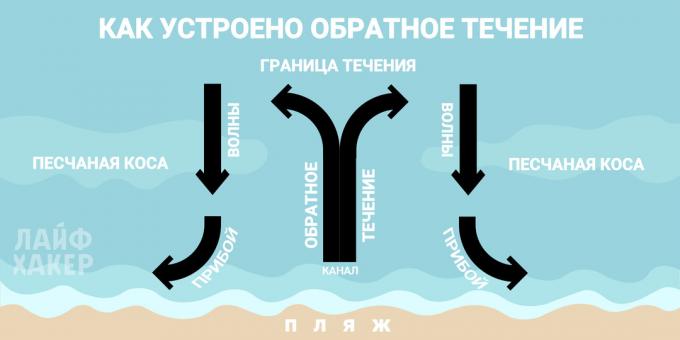 Reverse (or Thrower) for - a spontaneously occurring marine coastal current perpendicular to the shore line. Usually it occurs at low tide in places where near the shore are sandbanks, reefs and shoals. Because of them, the water can not return to the sea evenly, so the main stream rushes at high speed into the strait between obstacles and quenched immediately after them. The result is a strong current that can instantly carry out a person for a few dozen meters from the shore. The width of the flow varies from 3 to 50 meters and the flow rate of water in it - from 2 km / h to 20 km / h.

Than it is dangerous?

According to statistics, over 80% of deaths of bathing in the sea and ocean beaches takes place because of the backflow. The main danger of such a course is that it occurs very close to the beach - where no one is waiting for danger. You can stand in the water a few meters from the edge and suddenly be taken up by a strong current. Taken by surprise the victim trying to fight and row to shore. However, this is almost useless, a person simply becomes exhausted and dies. In addition, close to the shore is usually splashing those who can not to swim.

Where it can be found?

Backflow can occur where there is a surf: mainly in the seas and oceans, but it is found in large lakes. Strong inverse flow usually occur in places where there are sea walls, levees, reefs, offshore islands, spits and shoals. If you are going to lie down, where they like to hang out surfers, then you are likely to see a reverse flow.

How to recognize it?

When the reverse current normally can be seen:

If you are going to spend holiday abroad, remember the phrase rip currents and do not go into the water where you see it on the flags and signs.

What if got in reverse flow? If you feel that you have dragged into the sea, try to call out or send a signal to others that they alerted rescuers. Do not panic, and in any case, not against the current Row. Instead, try to swim parallel to the shore, if not for a very strong, you will likely be able to quickly get out of it. If the swim of course does not work, save the power forward and swim with the current. It pretty quickly weakened, and then you will be able to sail away to the side, and then return to the beach.

How scary! Maybe it is better not to go into the water?

In fact, it's not so scary if you know the structure of the reverse flow. First, rapidly moving only the upper layer of water, which means that it does not drag away to the bottom and does not engulf you wave. Second, the width of the flow, as a rule, does not exceed 20 meters, which means that you can try to get out of it drifted quite a bit along the coast. Finally, the length of such a trend is not very large: more than 100 meters you will not carry off. If you swim where there are lifeguards, they get to you for a couple of minutes.