Unique places in Russia, about which you are unlikely to hear: Ruskeala

The middle of the XVIII century. Novoprovozglashonnaya capital of the Russian state is developing rapidly. Build palaces, bridges Square, smash parks. St. Petersburg need marble. Urgent much. It is desirable home to cheap and close.

Ruskeala (from Karelian reskea - «brown, brown") - a small village in North Priladozhie. It is easy to get lost on the map, if not unique nature and glorious history.

For centuries, these lands were the subject of military disputes of the three states, and passed it to the Swedes, by the Finns, by the Russian. Therefore, the first developers Ruskeala marble quarries were Swedes. The first quarry, they built there at the end of the XVII century.

After the end of the Northern War Priladozhie left for Russia and Ruskeala canyons taken over by the Field Marshal Buturlina. marble production temporarily abandoned.

But in 1768, with the filing of the local pastor Samuel Alopeus in Ruskeala work started again. On all sides flocked master stone business, architects and mining engineers. Imperceptible border village just became an industrial center for several years. During the 50 following years produced more than 200 thousand tons of marble. Boulders loaded on sleds pulled by 80 horses, and drove to the pier. There they were shifted to small sailing craft and floated on Lake Ladoga to St. Petersburg.

The second half of XVIII and the beginning of the XIX century can be called without exaggeration era Ruskeala marble. This noble ashy stone to decorate the interior of the set of objects of the capital:

But the most famous building, which was used in the decoration of marble Ruskeala - St. Isaac's Cathedral. Architect Auguste Montferrand personally visited Ruskeala to control vylomku stone. As a result, the walls are lined Isaac Cathedral beautiful white-gray marble thickness of about 50 centimeters.

In the second half of the XIX century marble began to go out of fashion (metropolitan architects switched to granite). Active mining marble in Ruskeala stopped. In 1896, the mine hired Finns: built of marble and limestone plant and produce marble chips, and she, in turn, plastered walls and flooded floors.

Production closed from the beginning of the Soviet-Finnish war of 1939-1940. Marble quarries were flooded. According to one version - the Finns, on the other - the Soviet Air Force. 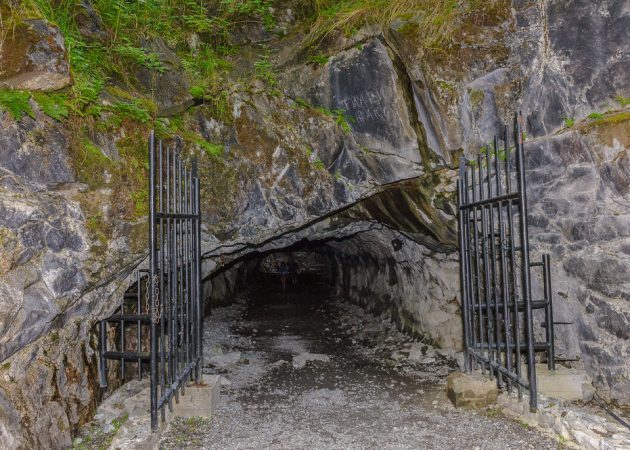 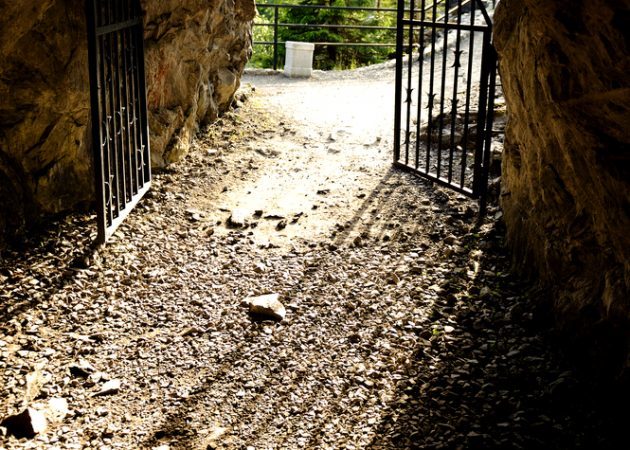 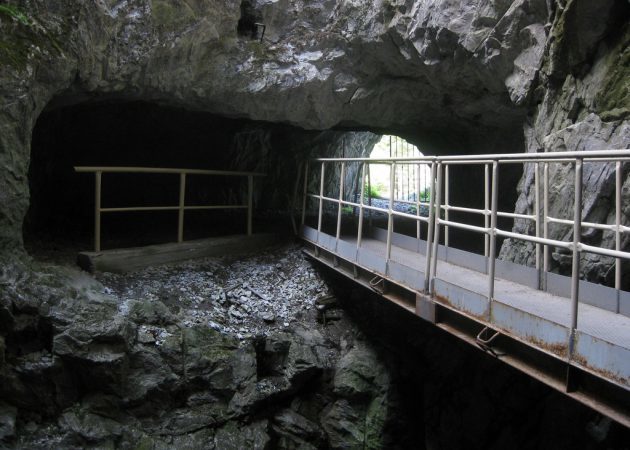 What to see in Ruskeala?

At 4 kilometers from the village is Ruskeala place by which it is impossible to drive, going to the marble quarries. It Ruskeala cascade - a chain of four small but picturesque waterfalls.

Tohmajoki River ( "mad river") flows into Ladoga and has a plurality of thresholds and sills, the largest of which form waterfalls. The largest is called Ahvenkoski that in Finnish means "okunovy threshold". To say that the place is beautiful, - to say nothing. That there is only the fact that it was shot one scene in the film "The Dawns Here Are Quiet".

This waterfall is clearly visible from the highway leading to the Ruskeala. Next to it there is parking, a gazebo and a souvenir shop. Ruskeala waterfalls - a perfect place to relax on the way to the mountain park "Ruskeala" and take some photos. 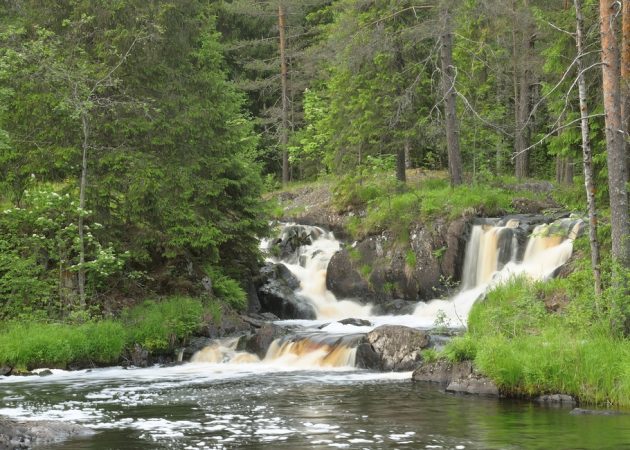 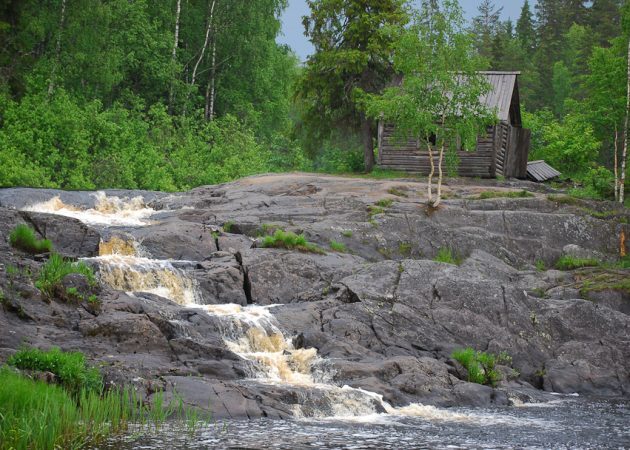 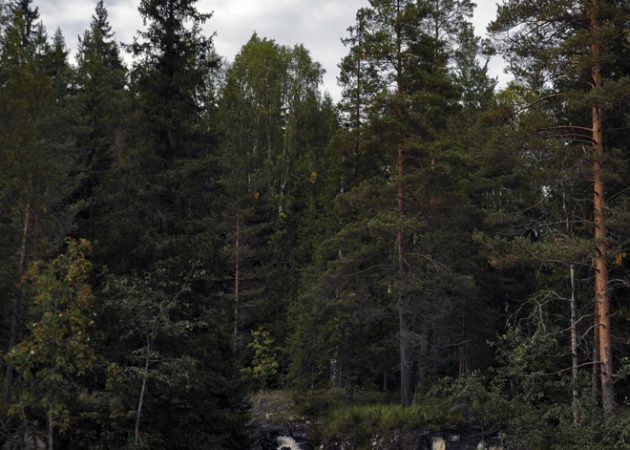 But the pearl Ruskeala - is, of course, Marble Canyon. It is part of the mountain park "Ruskeala" (more about it later) and is a huge stone bowl filled with blue-emerald water.

Length Marble Canyon - 460 meters, width - up to 100 meters, sometimes up to 50 meters depth. This is the place where the marble was taken to St. Isaac's Cathedral in St. Petersburg, and other monuments.

Canyon makes a great impression! Sheer silvery marble rocks, leaving deep into the clear waters, caves and tunnels - all this It creates the feeling that you are in dreamland, and is about to look out of the mine dwarf with a pick ready. 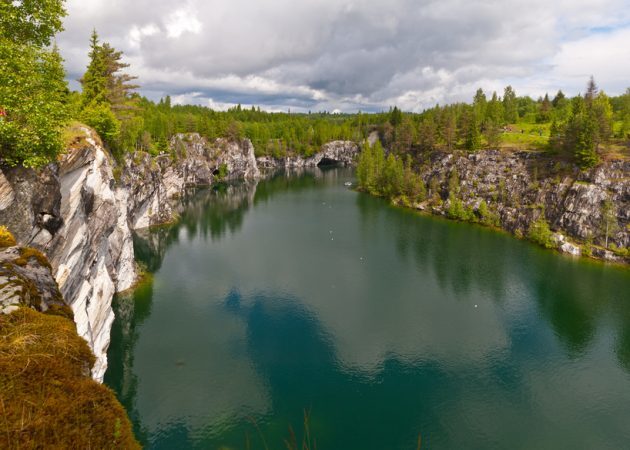 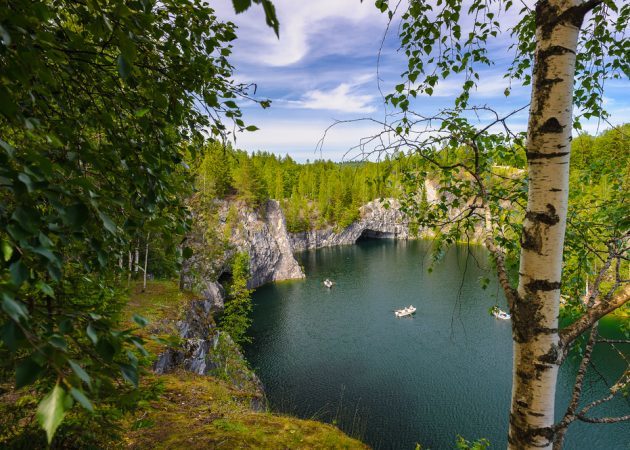 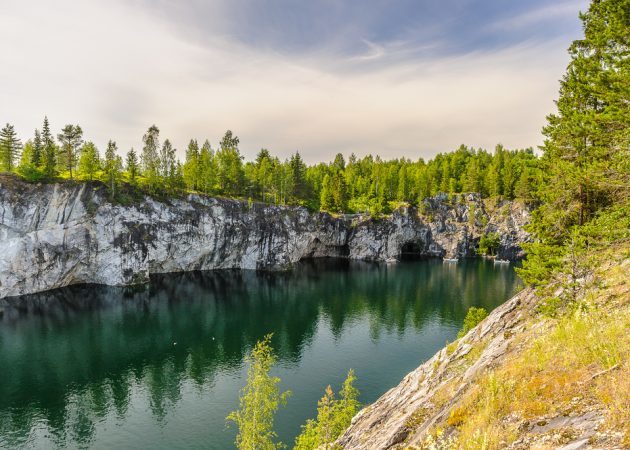 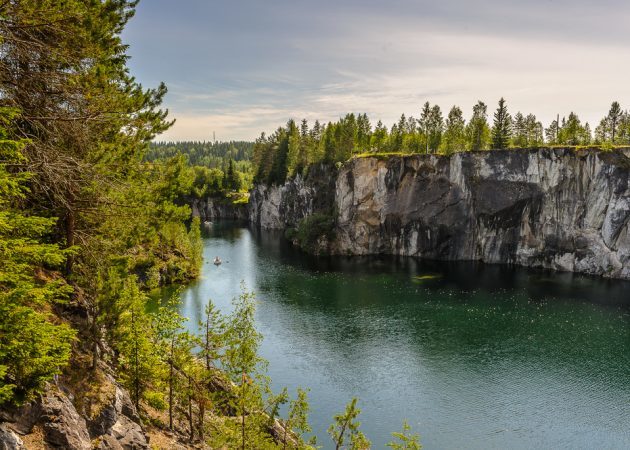 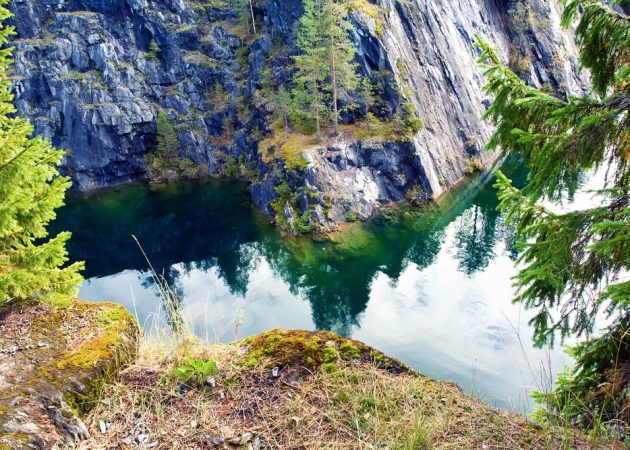 Particularly striking water. The quarry is fed by groundwater clean, no algae on the bottom. Therefore its transparency reaches 15-18 meters in some places you can even see the technique, left at the bottom of the quarry.

Marble Canyon flooded to the upper aquifers (there were seven: three underground and four above ground).

Horizon - a layer secreted inside the rock.

Most of the tunnels are under water. Only one of them, in the north-western part of the park, it has remained above the water level and open to the public. It is believed that it struck the Finns in the 1930s to transport trucks loaded with marble from the mine number 2. The mine itself is flooded by about a third, on its bottom you can see the ice, which is not even in the summer melt.

Shtolnya - a horizontal or inclined excavation having access to the earth's surface.

Another attraction of the mountain park "Ruskeala" - Ruskeala failure. This collapsed arch underground excavation. According to the recollections of local residents, it was formed in 1960 after a strong explosion in the quarry. As a result, on the surface of the earth formed a huge pit width of about 30 meters.

A special feature is the failure of its microclimate. On the far side produce ice it never melts, where the walls hang whimsical icicles. But in the place of the failure of a small lake formed in the warm season. Therefore, to get deep into production, you must first go down on a rope to the boat, and then on it to get to the ice "sex." In winter, everything is easier: once you go down on a sturdy ice. 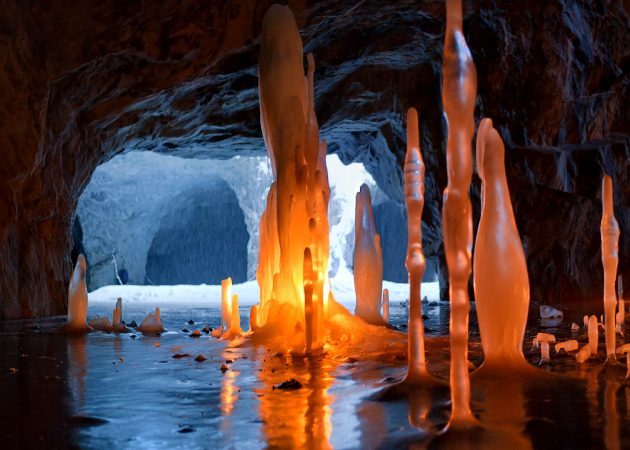 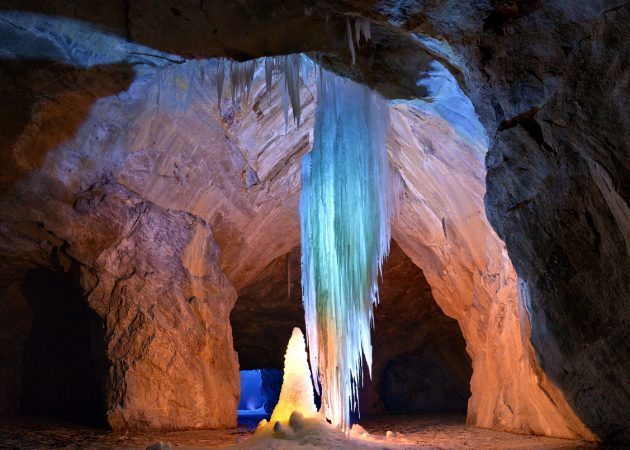 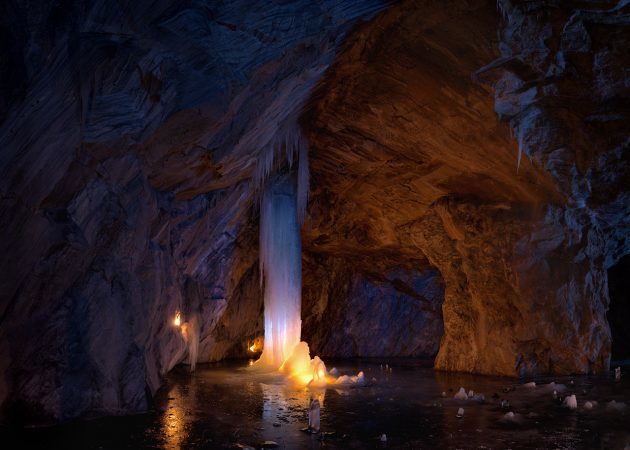 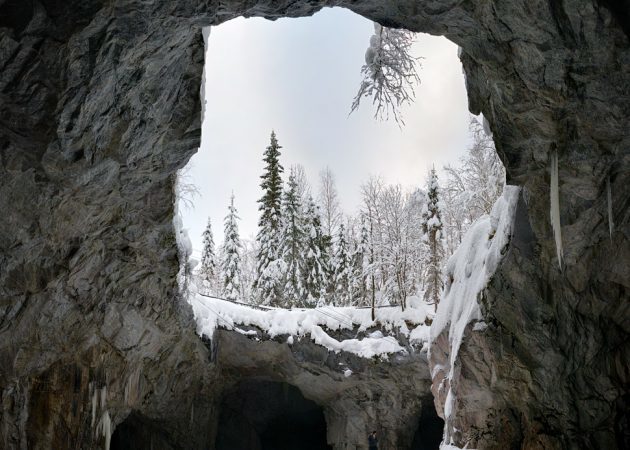 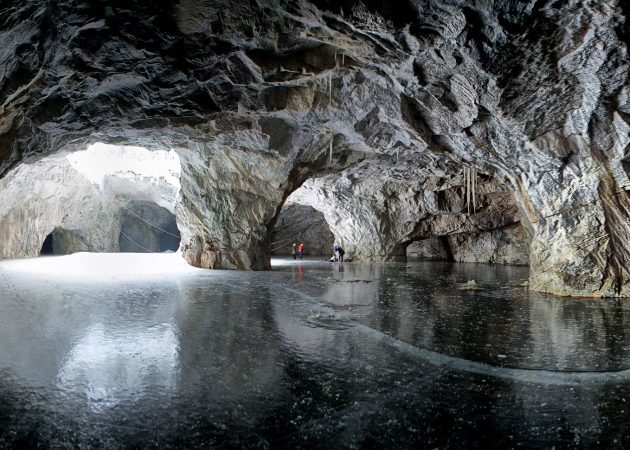 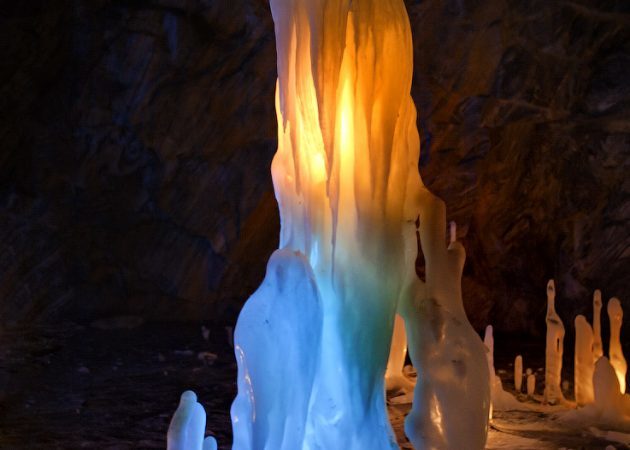 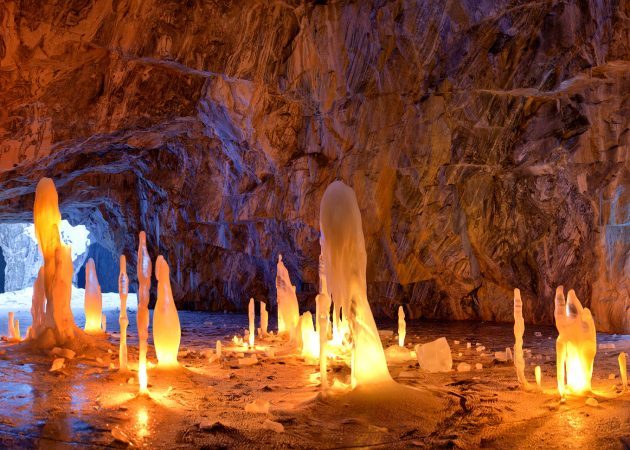 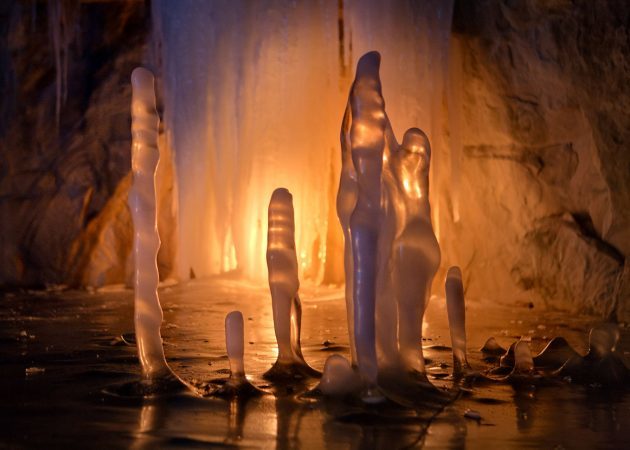 In this interesting places in the mountain park "Ruskeala" does not end there. On its territory there is also the so-called Italian quarry. Until the 1970s there was mined block of marble by Italian technology (hence the name) with the use of foreign machines. There are clearly visible color and texture of marble and traceable method of its production. Its as bread, cut into big layers using wire saws, layer by layer.

Ruskeala attractions - this is a rare symbiosis of natural objects and industrial open-air museum. Looking at all this beauty, can not help thinking: "How rich our planet, how much she can give us."

Things to do in Ruskeala?

As already mentioned, in 2005 Marble Canyon and Ruskeala failure and Italian quarry became a part of the mountain park "Ruskeala".

The park was created forces private companies that have merged, contributed money and brought these objects in order. They have taken out the garbage and scrap metal, comfortable paved walkway, built viewing platforms. Held lighting on the perimeter of the canyon - now at night marble rocks shine colored tints. It is a pity that the artistic lighting operates only in the winter (November to March), and only on Fridays and Saturdays.

We created and infrastructure. Built car park, cafe, toilets, souvenir shops and a pier where you can rent a boat. The boat trip on Marble Canyon is considered the most exciting: you can swim in the grottos, swim up to the galleries and feed the ducks. 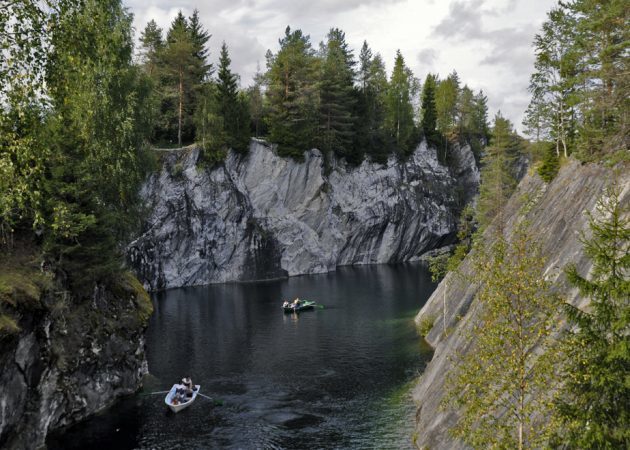 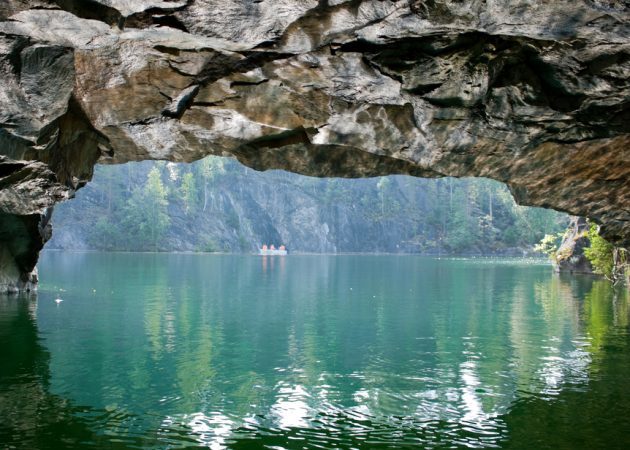 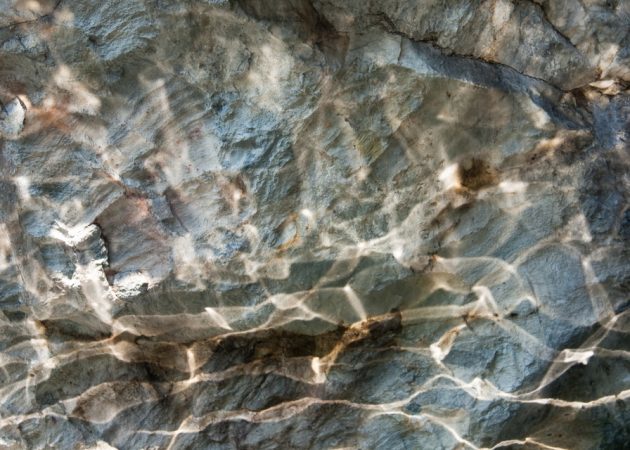 The park is open all year round, from season to season changes only mode. After Ruskeala attractions ennobled, entrance to the park, of course, was paid - 150 rubles per person. Rent a boat, guide and other services are also cost money (detailed price list here).

But the park offers visitors plenty of entertainment. Lovers of thrills appreciated them:

Another popular way of spending time in the park - diving. As you remember, Ruskeala Marble Canyon has three underwater horizon. Flooded mines, connected galleries, like the mysterious labyrinth. Lovers of scuba diving can become a true explorer and see what is hidden in the ancient quarries.

But perhaps the most exciting adventure in the mountain park - descent into failure. To do this, you need to have special equipment and authorization from the Directorate of institutions. In addition, the rope descent to 16 meters depth - the occupation is very risky, so this should be done in the presence of professionals. There are guys who organize descent into failure Ruskeala. Even if you're not a fan of extreme sports, types of opening in failure, are to overcome their fears. In winter it is as if the residence of the Snow Queen! Watch this virtual tour and you understand everything yourself.

Of the more tranquil winter fun - skating on the Huskies (those fluffy mils) and photographing them. Also at the park and in the surrounding area, various entertainment events are held from time to time: concerts, folklore festivals, historical installations, contests and more. 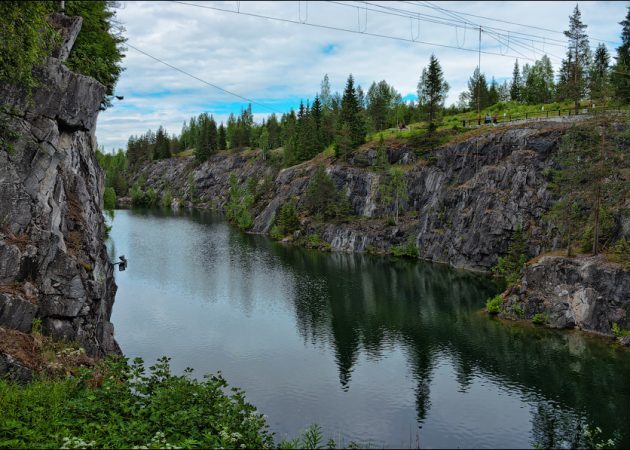 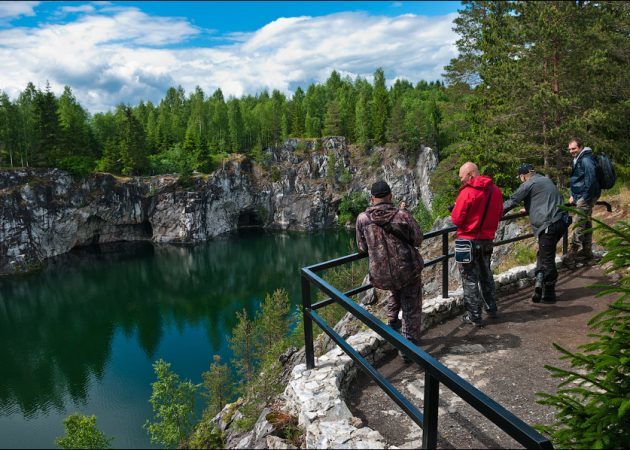 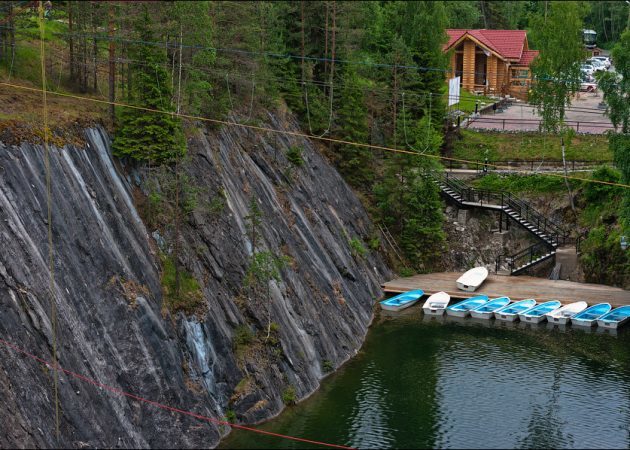 Arriving at Ruskeala better for a couple of days. Especially with the placement will be no problems. Near the park there are two recreation centers and tourist complex. In addition, during the summer, many prefer to break camp and relax in its stowed position.

But on camp offers not only comfortable beds, barbecue and equipped with bath, but also more fun. So, you can rent bikes and explore the area, you can buy a tour by jeep or go rafting.

Rafting - a sport rafting on the mountain river in six-, four- or double inflatable boats.

Alloy Tohmajoki carried out on the river - you can not only see Ruskeala waterfalls, but also to feel their power.

In short, bored Ruskeala you do not have to. From this location you will take away a lot of beautiful pictures, no less vivid impressions.

How to get to Ruskeala?

On a personal car

From Saint-Petersburg route runs along the A129 road through the city Priozersk and Sortavala. When you reach the last one, you need to turn onto the highway A130. Distance from Peter to Ruskeala - about 300 kilometers.

From Petrozavodsk to Ruskeala leads first run M18 (another name - the R-21), with which you want to turn to the villages and Lyaskelya Helylä (M130 road) near the town of yarn.

From Petrozavodsk to Sortavala daily shuttle coaches. The schedule is available here. In turn, from Sortavala to Ruskeala can be reached by shuttle bus. Also from Sortavala to Marble Canyon, you can get a taxi for a few hundred rubles. With a taxi driver, you can arrange a day and time when it will return to you.

From St. Petersburg to the town of Sortavala 350A there is a train "Saint Petersburg - Kostomuksha." 23 hours - and you are there. It is a pity that the train runs every day. Explore schedule. How to get from Sortavala to Ruskeala - see above.

It is also possible to get there by train, but will have to make several changes.

The railway route is the most uncomfortable and time-consuming.

Why Go to Ruskeala?

Because Ruskeala - This is beautiful mountain park with a system of underground caves, Marble Canyon, waterfalls and recreation. This is a tourist complex, where at any time you can spend an active holiday with the whole family.

Marble Canyon is so beautiful that even eclipsed the Norwegian fjords. Silver steep walls embrace transparent emerald lake, could be seen drifts cave. It seems as if was in a fairy tale and everything around has special magical properties.

But most importantly, Ruskeala - an industrial monument, where you can trace the history of mining from the XVIII to the XX century. Century workers toil quarried marble, adorned palaces of St. Petersburg.

"It is more important to continue communication than sound smart." Interview with the linguist Alexander Piperski
Workplaces