Unique places in Russia, about which you are unlikely to hear: Divnogorie

"Priplyhom to the quiet pines and We have seen the pillars of white stone, marvelously Well and red stand side by side, like a stosis small, white, and exceedingly bright over River of pine "- so in 1389 wrote about the place where the winding Quiet Pine flows into the mighty Don traveler Ignatius Smoljaninov.

Towering above the river valley, in the midst of which are white lumps appeared to our ancestors unprecedented divom. They never called her - Divnogorie. Centuries have passed, but today other than a miracle is an ancient place can not be called.

Divnogorie - a steppe plateau in Liski district of Voronezh region. From the geological point of view it represents a chalky deposits - solid layers of chalk, coated with a thin layer of soil. This is evidence of the distant past of the Earth: formed the continents, oceans parted.

Chalk outcrops in the form of pillars - a multimeter giants rising in different parts of the plateau. Once upon a time there were about twenty, but now there are only six. Locals call them divas.

On the plateau special microclimate: the raised surface is heated rapidly, and the hot air disperses the clouds; the weather is usually dry and hot. Surprisingly, in spite of such features of climate and soil on the territory of the plateau there are more than 40 species of unique plants and animals are found rare.

For flora Divnogorie scientists call plateau "Reducing the Alps." Spring valley full of wild flowers: spiny dogfish, adonis, Androsace; in the summer it becomes brownish-green. In the middle of the last century on a plateau planted windbreaks of maple and ash trees. Due to the nature of chalk soil moisture and small trees still seem young. 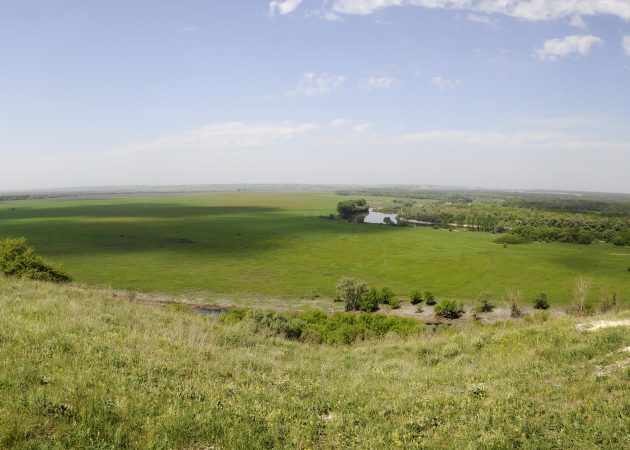 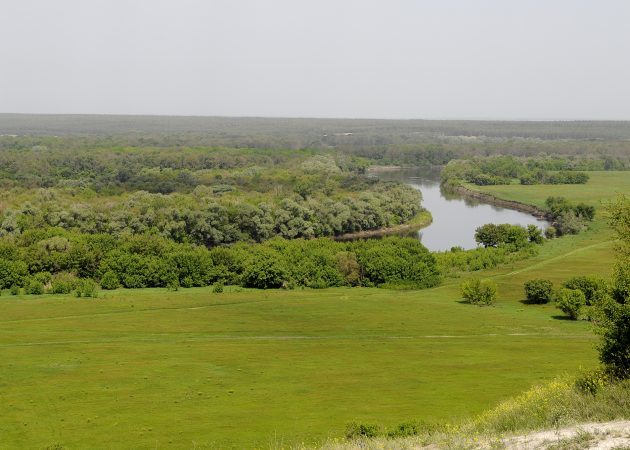 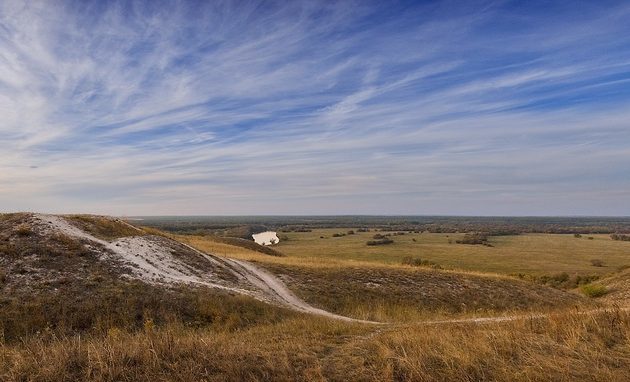 No less unique and fauna of the plateau. Home to rare bustard and eagle, many owls, larks, harriers. Mammals can be found hare, fox, ferret.

For one only nature can be considered Divnogorsky plateau reserved. But these places are unique and from a cultural point of view. The remnants of the Khazar settlements of IX century, the cave temples, ancient monastery and chalk up Diva Museum "Divnogorie" today.

What to see in Divnogorie?

Offers assign Divnogorie reserve status were heard at the beginning of the twentieth century. But with the advent of Soviet power on the natural and cultural value of these places forgotten. The monastery, which operated there since the XVII century, was closed by placing it first in the holiday home, and later hospital for tuberculosis patients.

Only in 1988 Divnogorie opened a museum (a branch of the Voronezh regional studies). Status State Natural Architecture and Archaeological Museum-Reserve Divnogorie received in 1991.

Currently, an open-air area of ​​the museum is about 11 square meters. km. It includes several attractions, the main ones being the Mayak settlement and Assumption Monastery with cave temples (Large and Small Diva).

Mayaki settlement - is an archaeological site IX-X centuries. In those days Divnogorie inhabited Alan tribes. This semi-nomadic people founded a few settlements, cultivated floodplain land near the plateau, was engaged in pottery.

Politically, this land belonged to the Khazar Khanate. Khazaria needed reliable outposts that would protect her from harassment Slavs. One of these was Mayaki and settlement. Don Alans the settlement was surrounded by white stone fortress with six-meter shafts, walls dug a deep ditch.

The fortress served as a defensive and fiscal functions (to locals brought tribute to the Khazar Khanate). In addition, there the caravans to rest and change horses.

In the tenth century the fortress became subjected to raids by the Pechenegs. At the same time weakened the Khazar state. Don Alans together with Khazar governors left the mound. 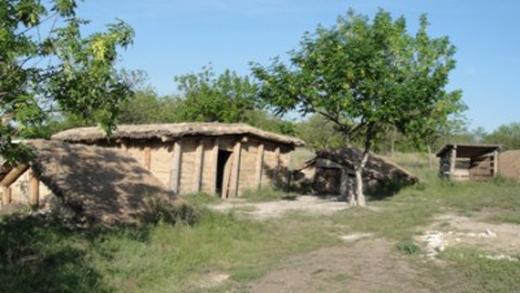 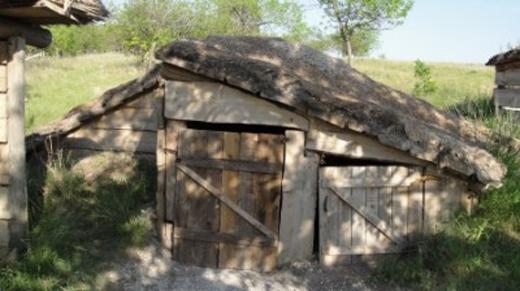 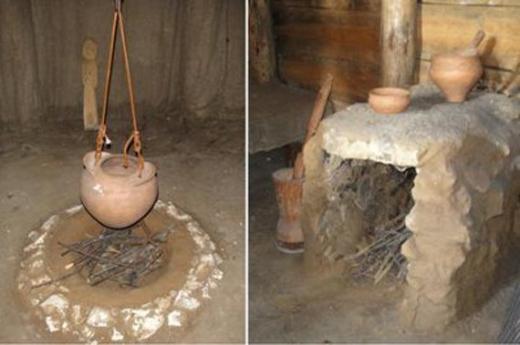 But most clearly demonstrates the life of Don Alans Archaeological Park, located not far from the settlement. This reconstruction of the village of IX-X centuries. Huts, mud huts, similar to yurts, household items - you look and think: "Do people really lived like?".

There is a beautiful legend, if in the XII century, two Greek monk Xenophon and Joasaph who lived in Italy, tired of attacking Catholics went to Russia. With them they took the icon of the Mother of God of the Sicilian. The monks came to Divnogorie saw chalk pillars, and one of them dug a hermitage.

However, there is no written evidence of this. Officially Divnogorsky Monastery was founded in 1653 with the purpose of protection from the raids of the Tatars.

The two main buildings of the monastery - cave churches in the Greater and Lesser divah.

Large Divas - This two-storey cave carved in the rock of a Cretaceous rests. It was there in 1831, according to legend, was found the icon of Our Lady of the Sicilian, supposedly brought by once Xenophon and Joasaph. (Currently, the original icon is lost.) After some time, the cave was taken over by Divnogorsk monastery and became a temple. 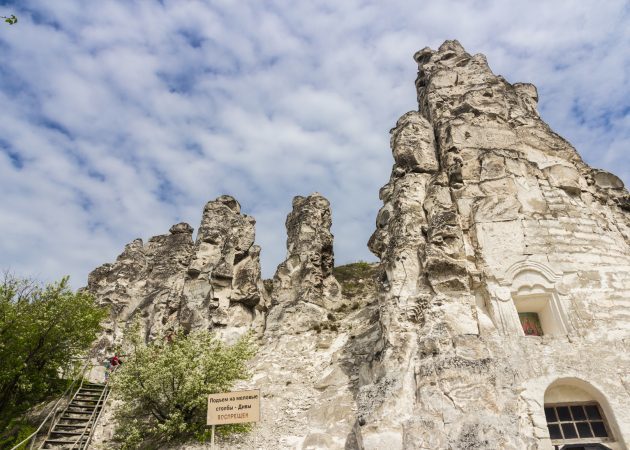 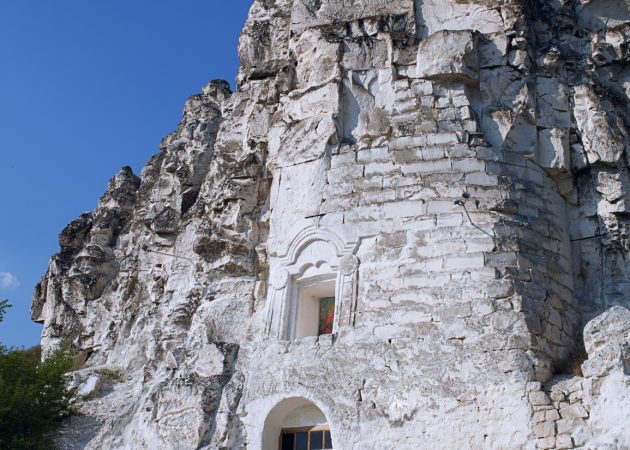 The church has an unusual architecture. On the ground "floor" - the altar and long corridors with semicircular arches; on the second - the upper chamber, where the monks once lived. Inside the temple all year the same temperature - about 12-15 ° C heat.

Next to the church - a ladder. If you climb on it, it offers a wonderful view of the plateau. Opposite the church - a spring water which is considered holy.

Another cave church of the Monastery of Divnogorsk (Small Diva) bears the name of John the Baptist. It is smaller in size, but the inside is quite similar to the church in the Big divah.

Generally caves in Divnogorie much more. Those who have lived here for centuries the monks dug complex underground tunnels, to be able to take refuge in troubled times.

Things to do in Divnogorie?

The best time to visit Divnogorie considered late spring: the plateau is filled with bright colors of flowering plants and their heady aromas. In addition, at this time it is not as hot as in the summer.

Of course, the item number 1 in the program of events in Divnogorie - a visit to the museum-reserve. Since it is located in the open air, the entrance is free - you can spend hours wandering around, admiring the local beauty. But to get to the museum objects, located on the reserve, such as the archaeological park, will have to buy a ticket. In this case, as in any institution, the museum has its own opening hours.

If you want to get inside the cave temples, you'll need to sign up for a tour. This can be done in the administration of the house, that not far from the farm Divnogorie.

Also, in the administration, you can buy a tour to one of the proposed route. In this case, all of the objects you hold the guide and tell you about the history and mythology of these places. But the price of the tour, quite frankly, bite.

Much luck if you visit Divnogorie in the days when various events are held there (usually it is time to beginning of May to end of August): ethnographic festivals, historical performances, exhibitions, open-air, and more more. As a rule, entertainment programs are held on the territory of the so-called Divnogorsk monastery (Styled manor, performing the role of platform for folk festivals and master classes craftsmen).

Plateau is located on the river Quiet Pine. Seaside Resort - a popular place for tourists with tents. On the shore is allowed to build fires, and in the river - fish and swim. Therefore visit Divnogorie may be for you not only to explore the natural and cultural monuments, but also a great holiday.

By the way, for fans of active pastime Reserve Museum organizes kayak rentals for rafting on Quiet Pine.

Item number 2 minimum program by visiting Divnogorie - Divnogorsky canyon. It is far from Mayatsky settlement and represents chalk gully fanciful shape ribbed a depth of about 30 m It's a great place for photography:. you can catch more than a dozen paintings frames.

How to get to Divnogorie?

You can get there by road and rail.

Distance from Voronezh to farm Divnogorie is 150 km.

If you go in a personal car and by public transport, you will notice that the direct bus from the regional center to the farm there. You can get there from the city Liski. Daily runs several flights (more with the schedule available here). From farm to Lisok Divnogorie also a bus (route: Liski - Kovalevo Divnogorie to the farm; Departure Time: 11:15).

From Moscow to the farm Divnogorie - 650 km. The path thus runs along the federal highway M4 (route E115). Passing Voronezh, you must turn to Liski, and then go through the settlements of Nikolskoye and Kovalevo and not reaching Selyavnogo, turn on Divnogorie.

For road transport in the territory of the museum-reserve is equipped with parking.

From Voronezh to Divnogorie can be reached also by an electric train. True, I have to go with change. So, first you need to get to Liski station and then to the station 143 km.

A detailed schedule of all the trains have to "Yandex".

Note! Go to the next name on the station 143 km, and not at the station Divnogorsk, which is a little earlier on the way. Platform 143 km is located in the immediate vicinity of the administration building of the museum-reserve "Divnogorie". This is a convenient starting point for the tour.

No wonder... According to the etymology of this word originates from the ancient "devas", meaning "deity", "spirits". Changing era - has changed the pronunciation, but the root remained unchanged. Gradually the "devas" steel "dives" and "dives" - "divas". And what, if not divine, were blocks of stone for the tribes and peoples who lived on the plateau?

Looking at these places can not help feeling something outlandish. Ancient landscapes and ancient monuments peacefully coexist with each other, creating a unique atmosphere. 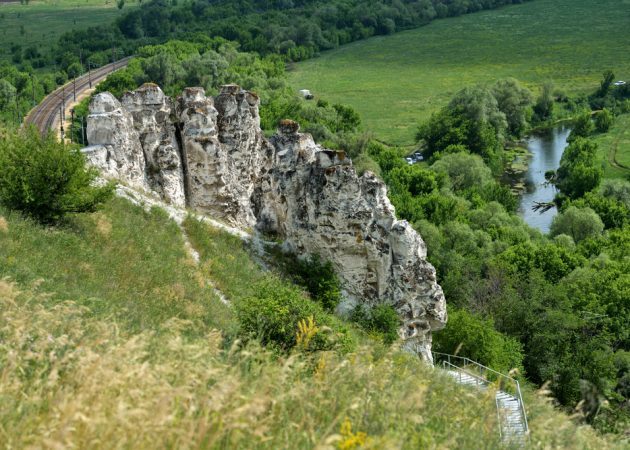 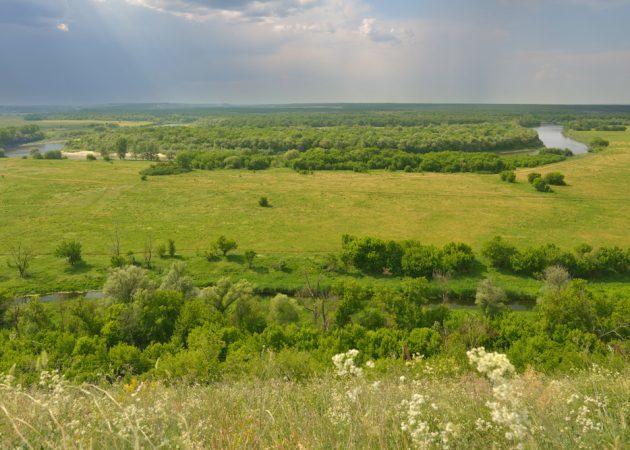 How old chalk divas? It is not known. But one thing is clear: they stood at the Khazars and Pechenegs, they survived the Russian Empire and the Soviet regime. Divnogorsky poles will certainly surprise and our great-grandchildren, and we do that there is a unique opportunity to see with their own eyes Diva.